Haida Gwaii prepares to kick off Edge of the World festival 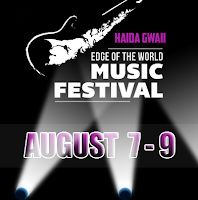 The camps sites have been filling up and Prince Rupert Grocery stores found a bit of a run on supplies prior to the most recent BC Ferry sailings to Haida Gwaii, as festival goers made their annual trek to the islands for the popular Edge of the World Music Festival

The event which runs from Friday to Sunday in Tell features a range of musical acts through the weekend including Sweat Shop Union, The House of David Gang, Isobel Trigger and what is being billed as a Surprise Juno Winning Saturday Night Headliner.

The event which first started in 1975 has in recent years become an end of summer destination for many across Northern British Columbia and beyond, as festival goers head for Tlell for the music and other events that make up the three day event.

Beyond the main stage music, the event features a Kids Music Camp, a number of arts and crafts vendors and the always popular food festival featuring a diverse menu of potential eats.

As of Wednesday evening, only a few camping spots remained available with registration having closed at Midnight of last night.

Those with reservations can set up their camp sites starting at Noon today and again at 10 AM on Friday. As part of the reservation process all campers must have purchased a Festival pass as well. 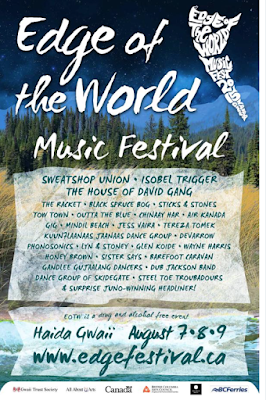 While updates on the happenings this weekend can be found from the festival Facebook page and twitter feed.

Email ThisBlogThis!Share to TwitterShare to FacebookShare to Pinterest
Labels: Edge of the World Festival 2015