Liberals turn to Telkwa for candidate in Federal election 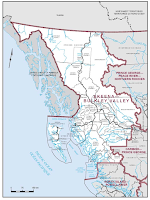 For the Northwest, it's a case of lose one, gain one when it comes to candidates for the October 19th election, as we noted earlier today, the Christian Heritage Party candidate Rod Taylor has left his Bulkley Valley base, choosing instead to seek out his political future in an Ontario riding,

But while one candidate is gone from the listings of those seeking office, another has stepped up to contest the election in the Northwest.

The Liberal Party of Canada is going to mine the apparently bountiful stock of politicians in the Bulkley Valley, selecting Brad Layton, a member of the Telkwa Town Council as the candidate for the Justin Trudeau team in Skeena - Bulkley Valley.

Mr. Layton, who works in the forest sector when he isn't tending to council business in Telkwa, was named as the candidate following a nomination meeting in Smithers on Wednesday.

He was acclaimed as the candidate for the Liberals, after no other would be candidates stepped forward to seek the nomination for the October 19th vote.

So far the National party hasn't updated either their Skeena-Bulkley Valley website or national listing of candidates to announce the addition to team.

As for the candidate he has told the Smithers based newspaper The Interior News that he won't be launching a full time campaign until after September.

The CHP Plan to nominate a replacement for Mr. Taylor by September, while the Green Party of Canada has yet to announce their plans for the election campaign.

For more items related to the Northwest campaign see our archive page here.
Posted by . at 11:02 AM