A North Coast artist who has already received much acclaim in British Columbia for her work, has once again taken her talents further afield, with the artistic creations of Tsimshian artist Kelli Clifton currently being featured at the Santa Fe Art Institute.

It's at that highly regarded home for Art on the campus of the Santa Fe University of Art and Design that the works of the Tsimshian artist and carver will bring the North Coast to the Southwest, through her participation in the summer series known as SFAI 140.

Ms. Clifton, introduced her work at the SFAI on July 23rd, part of the evening of inspiring talks and reflections on art and life. Her presentation to the Art Institute has now been posted to SFAI Vimeo page, providing a glimpse of her reception and what the young North Coast resident hopes to showcase during her time in the American Southwest.

And while Ms. Clifton shares her work with those living in and visiting the American Southwest,  there is good news for North Coast residents who may wish to get a sample of the talented artists work a little closer to home.

This week it was announced that the Museum of Northern British Columbia will be hosting a solo show that will feature her work this December.

That presentation will offer the opportunity to showcase the work that she has been producing during her time in Santa Fe, concepts that have been inspired by fishing, Sm'algyax and the relationship between art and language. 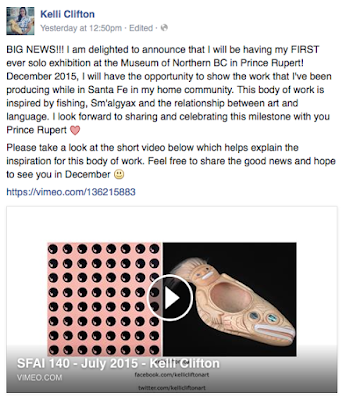 Beyond her touring work, Ms. Clifton has been prominent through her time with Northwest Community College in recent years, with her artistic work featured as part of the highly acclaimed Freda Diesing School of Northwest Coast Art at the Terrace campus.

She outlined the impact that the Freda Diesing School has had on her work through a video for NWCC in November of 2014.


Most recently her work was featured as part of a display at Vancouver International Airport, selected by the YVR art Foundation Scholarship Award for 2014, an honour that she received in 2013 as well.

During her time in New Mexico,  she has been featured as part of the SFAI Artist in Residence program, representing the Gitg'ata Nation of British Columbia.

You can learn more about her work there and what plans she has for the future through both her twitter feed and Facebook page.
Posted by . at 2:36 PM