A worksite accident at the Wainwright Marine yard on Duncan Road in the Industrial Park has claimed the life of a North Coast worker, with the incident now under jurisdiction of Worksafe BC for further investigation.

The Prince Rupert RCMP outlined some background on the Wednesday afternoon incident through a media release today, noting that they had been called to the Wainwright site shortly after the noon hour yesterday to investigate a report of that an embankment had given away with one male trapped in the water. 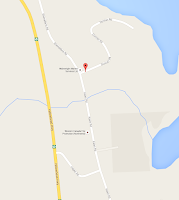 Despite the efforts of co-workers, BC Paramedics and the Prince Rupert Fire Department, the 49 year old male was pronounced deceased at the scene.

The identity of the deceased has not been released by the RCMP.

The investigation is now being conduced by WorksafeBC, with assistance from the Prince Rupert RCMP and BC Coroner's service.

Workers at the Wainwright location were turning away vehicles at the gate today as the investigation continued in the yard below.