North Coast NDP MLA Jennifer Rice offered up some late July commentary on a couple of issues of interest to the Northwest, with the MLA making her first comments related to the Banks Island Mining situation, as well as offering up a few observations related to Premier Christy Clark's cabinet shuffle of last week.

Ms Rice posted two notices to her information portals by the end of last week, with the current status of mining on Banks Island receiving her attention late Friday afternoon, as the MLA highlighted the work thus far of  the NDP's Norm MacDonald on the mining file in the Northwest.

As we outlined on the blog last week, the Banks Island mining site is currently the subject of a review from Environment Canada, and up until this week had been a topic that the MLA had not had much to say about.

The North Coast MLA's commentary of Friday notes that the has been in contact with the Gitxaala First Nation and noted some of the "conflicting" media reports related to the story.

“My primary concern is representing the interests of my constituents, the Gitxaala Nation, the mine workers and those concerned about potential environmental damage. Conflicting media reports have made this a difficult story to assess fully and I will continue to do that work so that the North Coast is effectively represented in Victoria ... My office is happy to take calls from media and from concerned citizens about this or other important issues in my constituency.”

Her full statement can be reviewed here.

The latest news from Banks Island is an announcement issued today from Yellow Giant Gold Mine ownership noting that operations have been suspended until permitting and regulatory issues at the project are resolved and the company has sufficient working capital to resume operations.

As for the cabinet shuffle, the North Coast MLA through her Facebook page called attention on July 31st to a lack of focus from the Provincial Government when it comes to BC Ferries.

Noting that in the Cabinet Shuffle of July 30th, no Minister is listed as responsible for BC Ferries in the new Clark cabinet, though perhaps a quick run through of the spell checker might have helped with the post, as Ms. Rice identified the Premier's last name as Clarke. 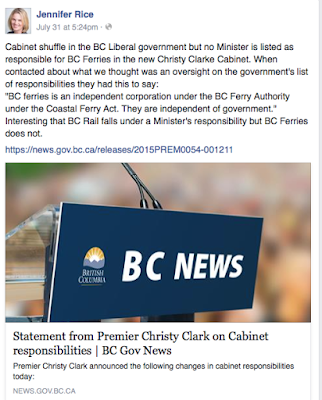 Still, spelling aside, the theme of more provincial interest in the workings of BC Ferries is something that will no doubt resonate with residents of the North Coast and Haida Gwaii, particularly those that rely on the Ferry service on a regular basis to travel in both directions.