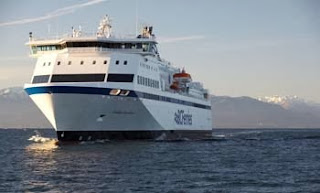 While the weather in Prince Rupert may be making for an enjoyable morning, such apparently is not going to be the case between the North Coast and Haida Gwaii later today, with BC Ferries cancelling today's scheduled sailing of the Northern Expedition.

Environment Canada's forecast for Haida Gwaii is calling for Southeast winds gusting up to 100 km later today, a weather system expected to impact on the North Coast as well.

A revised schedule is now in place, which will bring a three day delay for those travelling to and from Haida Gwai. With the cancellation from today, BC Ferries has also added on an additional round trip for Monday March 7th.

Sunday's sailing will depart Prince Rupert at 10 PM, Arriving in Skidegate at 7 AM on Monday.

The Northern Expedition will then make its return to Prince Rupert at 11 AM, with another departure for Haida Gwaii coming later in the evening at 10 PM.


You can find updated information from BC Ferries from their Service Notices page
Posted by . at 9:56 AM