A memo to City Council that was included as part of Information package for tonight's City Council session outlines a plan to improve the view of the city and harbour along the south side of Summit Avenue.

In his short review he provides a response from inquiries that appear to have been made from a Closed session of Council from January 25th, with Mr. Pucci advising that he has reviewed the costs and work involved related to the trimming of trees, noting that he will advise the Operations staff to proceed.

The work as explained in the memo, will see trees trimmed from the ground up, to create view corridors while standing or sitting on the benches along the Summit Avenue area, the tree trimming plan to be used described as one which will provide for the best use of the minimal funds the City has for the project.

No disclosure of the cost or timeline for the project was revealed through the memo to the City Manager, Mayor and Council.

You can review the full correspondence below: 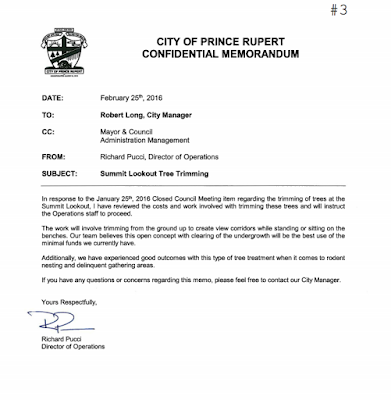 For more items of interest from Prince Rupert City Council see our archive page here.
Posted by . at 9:12 AM

Email ThisBlogThis!Share to TwitterShare to FacebookShare to Pinterest
Labels: City of Prince Rupert plans tree trimming along Summit to enhance views of city and harbour area