While the topic of what kind of housing preferred for the old Kanata school site has been of much interest and discussion with Prince Rupert City Council in recent months, those that will be most impacted by the proposed development, will get their first opportunity to comment next week.

The Bryton Group, which recently purchased the large tracts of land from the School District is hosting an Open House and Question and Answer period at the Conrad School Gymnasium on Wednesday, September 9th. An opportunity for residents of the east side of the city in the immediate area of the old school to gain some background on what all the talk is about.

The meeting is part of the company's application for rezoning for the land in question and will provide for a glimpse at what the company might have in mind as far as the creation of what would be a new neighbourhood for the area between Frederick Street  and Crestview Avenue. 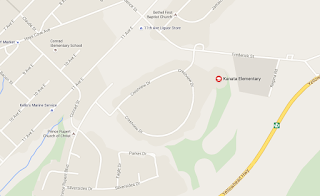 The schedule for the September 9th Open House goes as follows:

The topic of what kind of  housing would be best for the location has provided for some fairly energetic discussions around the City Council Chamber over the last three months, with the Mayor and Councillors Cunningham, Thorkelson and Niesh carrying the majority of the debate and views on the proposed development for the land.

The larger issue of Housing and the development of a number of proposed housing proposals in the community has been one of the more passionate of topics for this Council, with a bit of a split developing on Council as to what direction the city should be taking when it comes to the creation of housing stock for the community.

Some of the background on those discussions can be found below:

For more items related to housing issues on the North Coast see our archive page here.
Posted by . at 9:40 AM