Manitoba Awareness walkers to arrive in Prince Rupert on Wednesday 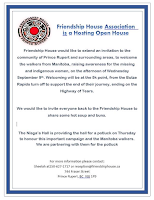 A summer long walk through Western Canada from Manitoba to the North Coast will come to an end on Wednesday, as a group of walkers from the Keystone province will arrive in Prince Rupert in the afternoon of the September 9th.

Plans are set for Wednesday to celebrate their long journey to raise awareness for missing and indigenous women, the local efforts will include a greeting from local residents at the Butze Rapids turn off, with North coast residents joining the Manitoba travellers in their final five kilometres into the city.

The final steps of the journey will take them to the Friendship House  on Fraser Street, where they will share some soup and other snacks, as well as possibly share some of their thoughts on their journey across the West.

Following their arrival of Wednesday, a Potluck is planned at the Nisga'a Hall on Thursday evening, where those that set out from Manitoba will share more of their message.

Today, the group of walkers is set to arrive in Terrace where residents of that community will be holding a potluck dinner at the Terrace Arena Banquet, preparing their guests for their final journey along the Skeena to Prince Rupert.

To help out, provide something for the potluck, or find out more about the timetable of the North Coast arrival contact the Friendship House at 250-627-1717.

Some background on their journey can be found below: