It's an incident which makes for one of the more brazen in a string of recent break-ins around the Terrace region and as the story continues to evolve there is a connection to Prince Rupert.

In the early hours of Wednesday morning a trio of thieves made use of a truck stolen from Prince Rupert to crash through the doors of the Misty River Tackle shop located on Agar Street on the south side of Terrace.

Video cameras caught images of the three individuals as they entered the store, taking an entire rack of weapons in the form of long guns as part of the incident. Following a review of the video, police officials determined that the three suspects  were two males and one female, the latter the driver of the vehicle.

The Terrace RCMP outlined the timeline to the incident in a media release from Tuesday, which notes that the vehicle, a beige 2006 Toyota Tacoma had been reported as stolen in Prince Rupert on December 30th.

The Video surveillance recorded the break in as taking place at 4:30 on Wednesday morning, the truck was found shortly after the incident, having been set ablaze and abandoned in the Thornhill area.

A link on the Terrace Buy and Sell Facebook page lists the serial numbers of the stolen weapons and a warning to be aware of any used firearms that may be offered for sale in the Northwest. And judging by some of the comments to be found on Social media in that city, some in the Terrace area are a little uneasy with such a large cache of weapons being loose in the community. 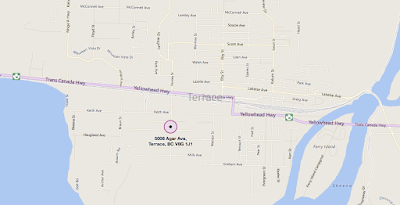 Terrace RCMP continue to seek the assistance of the public as they move forward with their investigation into the crime. Should you have information that could be of assistance you are asked to call the Terrace RCMP at 250-638-7400 or through the CrimeStoppers Tips line at 1-800-222-TIPS.

You can also contact the Terrace RCMP at www.terracecrimestoppers.ca or by text message at 274637 (CRIMES) adding the keyword TERRACE followed by your message.

The Terrace detachment's information release on the incident can be reviewed here.

For more items of interest related to Northwest Emergency Responders see our archive page here.
Posted by . at 8:54 AM