The Prince Rupert studios of EZ Rock may be empty this morning, but the wheels it appears are in motion to bring a new morning voice to the city's radio scene, as Bell Media continues on with its search for a new announcer for the North Coast.

The local outlet of the Northwest string of Bell stations has been without a Prince Rupert based announcer since the December departure of Lucas Anders. The former EZ Rock host took to twitter to say hello to his new audience in Fort Saskatchewan, Alberta this week. 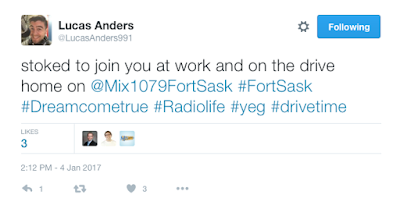 Anders currently is on the air with the suburban station Mix 107 in Fort Saskatchewan.

As for his old job in Prince Rupert Bell Media outlined some of the duties and qualification in their Help Wanted Notice posted to the national website on December 23rd.


Bell Media first posted the Help Wanted notice to their national website on December 23rd, the deadline for applications is listed as January 27th, which would suggest we will be listening to the Terrace based announcers for a bit longer as we start 2017. 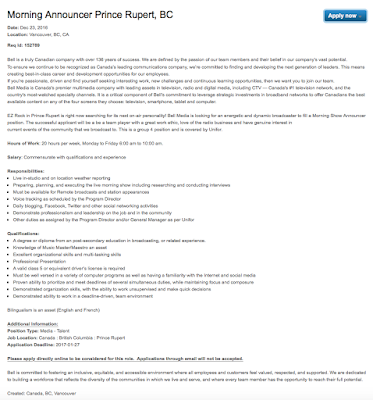 Prince Rupert is currently served by four over the air signals in the Northwest.

EZ Rock, which when staffed has a locally produced show in the morning and features Terrace based announcers for the remainder of the day.

Competing for the ears of listeners are CJFW which is also a Bell affiliate and CFNR a station with a focus on First Nations themes both broadcasting out of Terrace.

The CBC uses a dual host system based in Prince George and Prince Rupert, with the Daybreak North program broadcasting from 6 to 8:30 AM, Monday through Friday.

As well depending on how you point an antennae or position your car around the city, on occasion you can pick up a pair of FM signal out of Ketchikan, Alaska from KRBD and KFMJ.

All of the stations have streaming audio options available.

For a look at items of interest from the communications sector of the region see our archive page here.
Posted by . at 8:54 AM

Email ThisBlogThis!Share to TwitterShare to FacebookShare to Pinterest
Labels: Search on for local morning host for EZ Rock Prince Rupert