The first of the major infrastructure projects for Prince Rupert has reached the request for bid stage, with the City now in the process of accepting bids for the Woodworth Lake Water Transmission Project, a first step towards rebuilding the city's aging water infrastructure.

The request for Bids was posted to the BC Bid site in December and as this month moves forward, those firms interested in submitting their proposals for the project will be providing their plans to L & M Engineering, the Prince George engineering firm that is overseeing the bid process.

Upon receipt of bids later this month from interested applicants, the City will decide which company offers the best presentation for work that will see the replacement of the raw water supply Woodworth Lake to Shawatlan pumping station.

The project will see some 2,100 metres of water transmission main installed along the current route, with the decommissioning of the existing water main, as well as associated road construction and other elements of the work among the list of duties that will be required.

A review of the work to be done as part of the project is available on the BC Bid site a document which features an outline of twenty five contractor notes that list a range of conditions and substitutions that are associated to the work.

A collection of diagrams and maps is included in the bid propectus to give bid applicants a better understanding of the scale of work that will be required as part of the project. 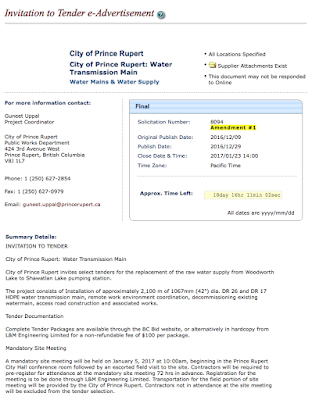 The Bid package provided by the City notes that today, January 5th is the day put aside for interested contractors to get an overview from the City on what the project is all about and to to take to a field trip to the Woodworth Lake site of the Dam.

The mandatory site meeting starts at 10 AM at City Hall with the trip to Woodworth Lake to follow after the city's presentation. Attendance at the session should give the city an indication as to what kind of interest their project is receiving, as the bid request notes that attendance at today's meeting is mandatory and those not in attendance will be excluded from the tender selection.

And while the group lay in provisions for the trek inland later in the day, we suspect that Mayor Lee Brain won't be leading the expedition into the Prince Rupert backcountry this time around, a journey he and the city's Director of Operations Richard Pucci took in the Spring of last year.

At that time the two put together a video presentation on the nature of the city's water woes at Shawatlans. That production provides us with a look at what the bid applicants might be learning today, as they explore the challenge of rebuilding the city's water infrastructure.

The deadline for submission of tenders for the project is January 23rd, with the tenders to be opened in private session; with results to be made available at the discretion of the City of Prince Rupert following a review period.

The city is currently in the process of putting together grant applications for the two other phases of their larger water supply rebuild program, though how far along in that process the city had not been outlined in a public session of Council by the end of 2016.

You can find more information on infrastructure issues for the city in 2017 from our archive page here, a look back at some of the topics of discussion from last year can be reviewed here.