For the Prince Rupert Rampage, the Road to the Coy Cup starts in Hazelton on Saturday

The Prince Rupert Rampage will be hitting the road to launch their quest for a Coy Cup berth in March, with the CIHL playoffs set to get underway this weekend in a number of communities.

For the Rhinos, it's road trip to Hazelton on Saturday, as they take on the Wolverines in Game One of their playoff series at the Upper Skeena Recreation Centre.

The Second place Rampage and third place Wolverines have had some pitched battles through the regular season, with the Hazelton team making for a strong showing in their return to the CIHL following a lengthy absence.

The Rampage head into the playoffs on a winning note, having topped the Wolverines last Saturday at the Jim Ciccone Civic Centre, besting the Hazelton squad in an OT thriller.

The past weekend also made for a good run on the score sheet for the Rampage's Tyler Ostrom, he made the most of his scoring opportunities and provided for enough helpers on the weekend to vault to the top spot and claim the CIHL's Regular Scoring title. 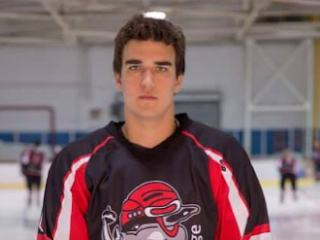 The Rampage sniper wrapped up his regular season with 9 goals and 17 assists for 26 points, making for but a single point to spare between Ostrom and the Ice Demons Tayden Fowler McNab, the Kitimat player who had held the top spot for much of the regular season.

Other CIHL playoff action this weekend will see the Kitimat Ice Demons and the Smithers Steelheads play in a one game elimination match on Friday night.

The winner of the Smithers/Kitimat heads for Terrace and a Saturday start for a series with the River Kings.

In the Cariboo, the Kangaroos and Stampeders will launch their playoff of Saturday at the Quesnel Arena.

You can keep up with travels of the Rampage during the playoffs through their Facebook page here.