And in the end, the City selects Option Four?

The City of Prince Rupert wrapped up their Budget Deliberations for 2013 on Thursday night, bringing to an end the almost six month process of review, surprises and consultations on the way to a financial blue print for the year ahead.

It was a  process that saw City Council spend countless sessions through the late winter and early spring to formulate some thoughts, taking the pulse of the public both at Council and in a last minute public forum, wrapping it all up by running through the soon to be departing CFO Dan Rodin's three financial options.

And after all of that, they decided on Option Four.

You haven't heard of Option Four, well don't feel too bad, it wasn't apparently up for public discussion.

The solution to the City's financial woes this year was cobbled together in closed door discussions with the Canadian Union of Public Employees, where CUPE members brought forward suggestions for the City on how to save some money.

Option Four, is it seems is basically the Old Option One, with a slight change in the proposed tax increase and a large draw down on the Operational Surplus, with one new addition, the prospect of savings gleaned from those closed door meetings with the civic workers.

A solution that apparently will help the City shave at least 150,000 dollars off of its operational spending, maybe more, though don't ask the Mayor or Council for any of the details, they are citing Community Charter confidentiality as a requirement towards secrecy on the topic.

So, for the most part, after the nearly six months of budget prep work, it would appear, the decision making was not complete, until the Council held a last minute closed door session.

Closed door sessions are something that this council has been rather dependant upon over this current term of civic governance, which at times seems to give them more in common with the Politburo, than with the House of Commons.

Many a Councillor on Thursday night, made comment of the value of the public forum of Wednesday, something they suggested was quite important to the revised Budget planning.

Though the revelations of the latest of closed door sessions, will perhaps leave some of those members of the public that attended that Public Forum wondering if they were mainly just a bit of window dressing for the process.

The real nature of the change in the financial planning, seems to have been determined from that closed session with CUPE.

As for the CUPE deal with city, we will have to take the word of Councillor Kinney who stated that what the civic union brought forward "makes absolute sense".

Well if the Councillor says so, but really, who's to know for sure?

The details of those meetings are sparse, Councillors being very careful not disclose much in the way of information at Thursday's Open Budget session.

While it's obviously a good thing that the City workers have become engaged in the process of solving the city's financial troubles, the fact no one will share any of the details of their solution, doesn't provide for much in the way of optics when it comes to an open process.

The evolution of this budget decision, calls to mind the recent funding announcement over the Snowbirds, which previously had been turned down and then resuscitated in a closed session of council.

A situation which saw money somehow found to move ahead with the project, but no details on how the situation towards approval was achieved were disclosed.

It was a process that justifiably raised a few eyebrows at the time and left more than a few in the community upset with the closed door nature of that decision, which eventually led to a secondary public session to approve the funding.

The hallmark of Council of late, has not been one that is overwhelmingly on the side of the fast flow of information to the public on any number of important files.

At one time Council told us that CityWest was providing a regular dividend and as we have all learned in the last month, that's not quite so true anymore.

If anything through this budget process, we've come to learn that the City doesn't quite seem to understand how it's communications company works, nor does it appear to get much in the way of frequent updates from them.

Hence the April surprise, that threw out all of Mr. Rodin's financial planning.

As we've highlighted on the blog over the last few months, on those occasions that CityWest appears at Council, our elected officials haven't asked many tough questions of CityWest.

Frequently, whenever the topic of the communications company comes up, we're told of the need for confidentiality on a number of issues, owing to competitive concerns.

We've been told that the Watson Island file is a tough one, but we don't seem to learn much about that ongoing situation either, other than through the pages of the Globe and Mail.

Though we did have that one moment, when the Mayor said that if that situation wasn't resolved, he had fears that it could bankrupt the city.

A declaration that certainly caught the attention of the public,

Still, even with the Mayor himself expressing concerns on the danger to the city's financials of that file, Council takes offence when people (and especially the local media) suggest that there was a bit of financial pickle developing for the City.

While there have been updates from time to time, for the most part however, any talk of Watson Island in Council soon is taken to closed session, where we imagine the more useful of information is provided to those on a need to know basis.

Now, on the topic of perhaps the City's most contentious issue of the year so far and one which could very well impact the City's finances for years to come, it's back to the Closed doors, leaving us in effect to be told all is good, nothing to see here.

No need to ask any questions, there apparently won't be any answers.

As they gave first reading on Thursday to what we'll call Option Four, the workforce is apparently  now secure, the motion last week, for across the board cuts of three percent  and which provided for a split on Council, has been rescinded.

One twist on the Budgetary Road is that the planned tax increase has been scaled back by half a percent, with the City only increasing rates by 1.5 per cent this year.

Though our operational budget surplus will be 523,000 dollars less once they draw down on that, leaving the City somewhat vulnerable one might think, should any major problems arrive in the upcoming year.

It was a puzzling turn around, as council reversed itself on a very key issue, one week we're concerned about a large draw on the operating surplus, the next it's not that big a deal anymore?

Instead we are delivered a new blue print for the year ahead, one which the Mayor says is made of blind faith and good intentions.

Still to come, and providing for a major unknown, a contract for the Prince Rupert Firefighters which as  Mr. Rodin explained is tied in with the negotiations in Vancouver between that city and their firefighters.

Locally there will be contract negotiations with the Ferry Workers and the Civic workers of CUPE set to begin shortly towards a new collective agreement, a negotiation of which we most likely won't learn much about until after the signing ceremony.

And even then, it would appear that  we won't be hearing much in the way of detail,  as the City points towards Community Charter confidentiality.

It's all been a fascinating twist, in the now three month long roller coaster ride, where each week brought a new revelation, a new shortfall and leave us all with a new bunch of questions that for now won't seem to get answered.

Mr. Rodin gave Council some parting advice as he prepares to leave the City's employ on May 15th. As he observed to Council, the City  may have to face some hard questions for next year.

While on Thursday he seemed less concerned about the large draw down on the operating surplus than before, one would think hover it is no doubt still something to consider.  His synopsis for the public forum of earlier this week and with particular attention to Option One, providing a cautionary note on the topic that should be considered with the path that was followed..

A suggestion, that drawing down such a large amount from the Operating surplus, doesn't really address the longer term issue of balancing the budget in 2014. 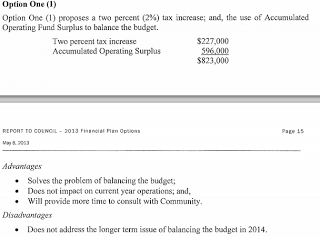 In the end, and after all this time, as they did with the debate over an Emergency Services Building, Council has basically just kicked their fiscal decisions down the road for a year.

Such are the things of blind faith and good intentions.

Check back in 365 days for the outcome.

It will be up to a new City Manager and a new City Financial Officer to make sense of it all, examine those arrangements made in the closed sessions and move the City further along the choppy waters it's currently in.

Something that would seem to be shaping up as a most interesting challenge for the lucky applicants, whenever they are hired.

Though again, we don't hear much about that process either, last month the Mayor declined comment to Northern View as to how the application process was coming along.

Just another day it seems, on the ongoing theme of we can't tell the public much about it at this time

If you think back to the last municipal election campaign, more than a few of the candidates of the day dedicated themselves to the goals of transparency and a more open Civic government.

Now, as it did back during the municipal election campaign, it all sounds pretty nice in theory.

In practice, most of the time, those declarations seem to just be words.

Council will hold it's final votes of approval on the Budget on Monday evening, making the May 15th deadline with two days to spare.

The media reviews of those Final Budget options can be found below: