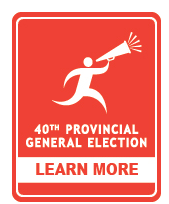 Wednesday morning has provided for no shortage of shock and discussion on the North Coast, as voters digest the local results and those province wide, the former providing little of a surprise, the latter a seismic shock of political proportions.

From the coffee shops of the city to its lively chat forums, the topic of BC Election 2013 played out, the conversation  mostly a review of the results of Tuesday night, which saw the NDP hold their grasp on the North Coast, while watching it all slip away province wide.

Conversations for some which were ones of shock, for others sheer giddy delight it would seem.

On the local chat forum hackingthemainframe, home for many an enthusiastic local NDP supporter, the various stages of grief seemed to be playing out among the truly devoted to the NDP.

With many a normally verbose and engaged commentator seemingly steeped in shock over the outcome of the provincial numbers on the night.

As we outlined in our post election review of the early hours of Wednesday morning, Councillor Jennifer Rice held this riding in the NDP column.

But she did so with a reduced vote count from her predecessor, as we outlined in our midnight hours review (an electoral theme picked up later in the day by the Northern View) the NDP actually had some 599 less votes this year compared to the 2009 totals.

Ms Rice's plurality at the polls was more than enough to easily secure victory, but surely it was a vote count that will leave many an NDP organizer wondering if a good portion of those former supporters were sitting this one out after the January nomination battle with PRDTF local president Joanna Larson.

Some of those disenchanted voters may have parked their votes with the Green Party as Hondo Arendt added to the Green totals from 2009 by some 129 votes.  A solid improvement for the Greens and not really enough of a gain for the NDP to claim that vote splitting was a major concern for the North Coast.

In fact, where those votes came from will make for much in the way of a project for NWCC's political science classes, one imagines that a few came from those that perhaps didn't find much common ground with the NDP candidate, or her party's policies on environmental matters.

Something that the NDP will no doubt wish to examine for the next electoral cycle.

The Liberal campaign also found numbers down from 2009, not surprising as for all her efforts on behalf of her party, Judy Fraser's campaign was nowhere near as visible as that of former Mayor Herb Pond in 2009.

In that election cycle Mr. Pond was seemingly everywhere and anywhere, the Liberals flooding the region with pamphlets, signs and such. Not surprisingly he had a very strong campaign, but yet, still came up short to Gary Coons at that time. Indicative of the tough road to Victoria that the North Coast presents to the Liberals.

This time around, the Liberal campaign seemed much of a show the flag kind of affair, with little in the way of actual door to door campaigning, or flyers making the rounds. Though she did benefit from a visit from the Premier who made a stop over on the North Coast at the start of the campaign.

Ms. Fraser's campaign also suffered a slow start, owing to some health concerns at the beginning of the election, a situation that required the rescheduling of the candidates debate and seems to have reduced the time she was able to give to the campaign.

With all of that, she collected a core vote of 2,500, which perhaps offers the party something to build on, though clearly the Liberal message will need a bit of refinement in the region to fully register on an election day.

As for the successful candidate, Ms. Rice will certainly have a fascinating learning curve ahead of her.

Provincial politics is truly a much more bare knuckles and dig in kind of venture, than the seemingly collegial atmosphere that Prince Rupert City Council has provided for her.

On Tuesday, we imagine Ms. Rice, like many other NDP candidates was anticipating joining Adrian Dix as part of a new government in British Columbia, the tsunami of results from Tuesday night leaving them once again in opposition, which will require a change of focus we imagine.

That Slogan of "Change for the Better" now destined for the archives of provincial electoral history, soon to replaced perhaps with "Keeping an eye on them" as about the best they can hope for over the next four years.

Councillor Rice, who will soon have to make a decision on her seat on City Council, will join what seems to be a block of Northern BC and Vancouver Island NDP MLA's making up a good portion of Adrian Dix's caucus (providing he's around much longer to lead that caucus).

All will be dividing up the shadow portfolios of opposition.

Whether Councillor Rice, with her limited political experience on the provincial scene will be provided with a high or low profile shadow job remains to be seen.

For those following last nights drama at home, political observers on the North Coast would have learned much about the reaction from Prince Rupert voters last night from social media,  a helpful tool which seemed to provide the best window on the North Coast as to developments in our local races.

There were many contributions of note made to the #princerupert forum on twitter, well worth reviewing for those looking for tidbits of reaction from all of the different supporters and observers on the night.

In the end, for the North Coast, Tuesday night has provided for little change in the political dynamic. From Haida Gwaii and the coast and on into Skeena, a good portion of the vote stayed with the NDP, but rather than anticipating the possibilities of joining a government in waiting, the ridings of the Northwest once again find themselves among the opposition ranks and among reduced opposition ranks at that.

As though to provide a final exclamation point on the historical nature of Tuesday's election, the total seat count at the end of the night of Liberals 50, NDP 33, Independent 1, Green 1 actually means that the NDP lost seats in the Legislature,  having lost three seats from the days of Carole James leadership and her 36 seats of 2009.

Something no one, whether on the North Coast or anywhere else in the province probably imagined when the polls closed last night at 8 PM.

You can review the campaign from our Election Desk archives, which we will update with further items as they develop over the next few days.
Posted by . at 2:55 PM

Email ThisBlogThis!Share to TwitterShare to FacebookShare to Pinterest
Labels: A look back at Tuesday's results on the North coast