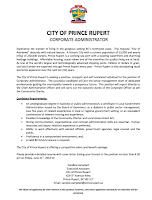 It's deja vu, all over again!

Much like we ruminated when the job posting for Dan Rodin's job popped up unexpectedly six weeks ago, we now have a new head scratcher to deal with from City Hall.

It seems like it was only yesterday that we were heralding the arrival of Robert Grodecki as the city's new Corporate Administrator, and now four years and a bit later and we're apparently looking to find a new one.

On Wednesday, the City outlined the details of a Job Posting to their website, seeking the services of a Corporate Administrator (view here), providing the background on the duties that Mr. Grodecki has handled since his arrival in March of 2009, with a fair amount of skill and under some rather trying times.

Now whether this means that he has been bumped to a more senior position, or has joined the growing  ranks of the exodus from City Hall remains to be seen.

While it's possible that perhaps Mr. Grodecki (if he had the qualifications) has been chosen to replace Mr. Rodin as CFO, (which would be about the only upwardly mobile position available at the moment). We wonder, would we not have seen an appointment letter, much as we did in March of 2009?

But as has been the case of late from Third Avenue, with little in the way of information from City Hall dispensed to the public, we're left instead to wonder, just what's going on at the home for Civic Governance in the city.

The City Hall nameplate maker has certainly been busy of late. Since January, the City has seen its City Manager and more recently Chief Financial Officer move on.

One, Mr Howie, for a position on Vancouver Island. The latter Mr. Rodin to remain a member of the community, though not in the city's employ any more.

All of which, combined with the just released job posting, makes for a rather swift revolving door situation in just five months.

One that is providing for a rather strained bit of stability, taking place at a time when the City perhaps needed some continuity most.

Regardless of how the recent personnel moves have evolved, they are changes that are sure to have made for an interesting first week for the recently hired City Manager, Robert Long.

As we outlined last week, Mr. Long arrived here on the 15th by way of Yellowknife. Bringing with him a lengthy resume on municipal governance and some interesting press clippings to the challenge ahead.

Perhaps the Mayor and Council could offer up some guidance to the city's residents as to why so many senior administrative positions are suddenly in the Help Wanted categories of late and what kind of impact all of this may be having on the day to day business at City Hall.

Then again, while Council may like to think it's been pretty pro-active with its residents, in reality communication with the public, hasn't been a particular theme of the last two years of this edition of Council.

Considering all the changes at the top of the Administration listings, it may be time to correct that.

Update: The Northern View caught up to the developments at City hall with this item posted to the paper's website mid afternoon Thursday.
Posted by . at 7:42 PM