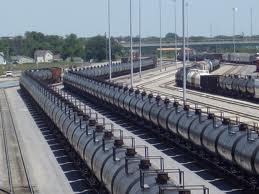 While the Northern Gateway proceedings continue on, the need for a plan B seems to be generating a bit of momentum, with Canada's major railroads seemingly the vehicle for potential oil exports should the pipeline projects prove unworkable.

CN Rail  has been fielding a number of inquiries of late, seeking further information on the prospects of shipping Alberta oil by rail to world markets, whether through the Northwest, Lower Mainland or if need be US ports.

A process of transportation which while a more costly prospect than by a dedicated pipeline, is one that would not require any form of governmental approval should it be adopted as a method of delivery.

An item in today's Globe and Mail outlines the growing interest from Canadian oil companies and Asian energy companies, both eager to find a solution to the pipeline troubles that the Enbridge Northern Gateway proposal has run into of late.

In the Globe and Mail article CN Rail's J. J. Ruest outlines the nature of the interest and the infrastructure that CN has in place already that could be used to serve that need.  But CN's executive-vice president and chief marketing officer stresses that CN itself has no desires to construct an oil terminal, something that would require approval of both federal and provincial authorities.

Energy companies however, have given the prospect of constructing terminals some thought it seems, though at the moment there is nothing in the developmental or even proposal phase to point to as a working plan.

Those companies no doubt are waiting to see how the process of the Enbridge hearings and the suddenly controversial discussions over the Kinder Morgan pipeline into Vancouver all shake out.

The topic of an oil port in the northwest caught the Port of Prince Rupert by surprise in February, as the first mention of the idea came to pass on the local scene. At that time the Port outlined how they are approached by many companies all of the time, but in this instance the idea of oil shipments out of Prince Rupert were but a concept.

It's most likely not a topic that they have any further news on to share at the moment and since February, there have been a number of other possibilities floated as how to move Alberta's resources to market.

Still to be heard from are the plans of British Columbia entrepreneur David Black and his Kitimat Clean refinery project, as well, CN's network also has track that leads to shipment points on the American Gulf Coast.

There is also the proposed rail link from the Alberta oil sands across Northern BC to hook up with the terminal at Valdez, Alaska, a project that would carve yet another rail link across the province, with perhaps an impact on the Port of Prince Rupert.

Eventually all that land locked Alberta oil is going to move somewhere, what seems unknown just at the moment is whether it's east, west, south or even north that the oil will go.

From our archives a few selected items on the topic of Oil by Rail over the last year or so.

March 2013-- The Oil by Rail Option, CN builds infrastructure for the future
February 2013-- The next battle over Bitumen?
January 2013-- At the moment just a red line on a map, but in the future...

Other items of note can be found in our archives whether with Canadian National, the Port of Prince Rupert, or the Kitimat Refinery project.
Posted by . at 3:06 PM

Email ThisBlogThis!Share to TwitterShare to FacebookShare to Pinterest
Labels: Oil By Rail options continue to percolate