When it comes to Bitumen. The Glengarry Glenn Ross approach didn't work... 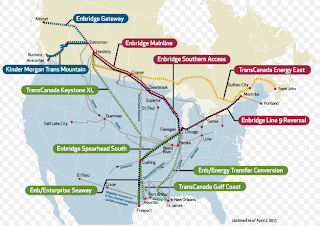 Should they ever get around to making a movie about the era of the Enbridge and Keystone pipeline debates, we imagine they won't go wrong if they use the movie Glengarry Glen Ross as a model for the script.

"These are the new leads. These are the Glengarry leads. And to you they're gold, and you don't get them. Why? Because to give them to you would be throwing them away. They're for closers."

As they say in Glengarry Glen Ross, the leads are for closers and at the moment, there don't seem to be many "closers" when it comes to moving Alberta's bitumen down a pipeline to Kitimat or the USA.

The approach that has been taken by proponents of pipelines out of Alberta is getting a pretty loud rebuke in the pages of the Globe and Mail this morning.

With National affairs correspondent Jeffery Simpson providing a pretty cutting review of the strategy in place from the triumvirate of proponents of pipeline development, Alberta, the Federal Conservatives and the oil industry itself.

His examination of the various proposals (and the fate that may be in store for them) to move Alberta's land locked reserves of bitumen to world markets, won't provide much comfort for those that were looking for a successful outcome to the current debates.

Simpson concisely highlights where the strategy has gone wrong, suggesting that they sent salesmen, instead of statesmen to make their case.

It's quite a fascinating look at how badly the file has been handled by all three levels, well worth a read as a primer into how off the rails an approach of consultation can go.

The chosen path in this instance, would appear to be one that clearly hasn't resonated too well with those they were seeking to woo.

It calls to mind another quote from Glengarry Glen Ross, one which rings pretty loud considering the troubles that the bitumen proponents have found themselves in.

"We're adding a little something to this month's sales contest. As you all know, first prize is a Cadillac Eldorado. Anybody want to see second prize? Second prize is a set of steak knives. Third prize is you're fired."

We imagine once all the dust clears from the pipeline debates, that third option is going to be a pretty popular one, on any number of levels.
Posted by . at 11:05 AM

Email ThisBlogThis!Share to TwitterShare to FacebookShare to Pinterest
Labels: Jeffery Simpson on the bitumen failures