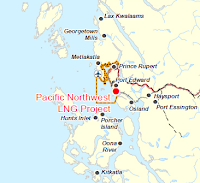 With a deadline for initial written comments on the Pacific Northwest LNG Project fast approaching, (comments must be submitted by May 8th), the Canadian Environmental Assessment Agency would seem to be preparing to move on to the next stage of the process, with plans to hold a workshop on the proposed project.

When the CEAA gets around to putting together its "working group" in Prince Rupert next week, they had best set a place at the table for Councillor Joy Thorkelson.

The City Councillor, who also is prominent in the local union movement through her work with UFAWU has made it pretty clear to all that, that despite the CEAA's apparent wishes for a small contingent from City Hall (well actually a contingent of one)  she will be taking in the sessions, attending as a member of her union if required, invitation or not.

The Councillor made her declaration in the waning moments of Monday's City Council session, after Acting City Manager Dan Rodin read into the record a correspondence from the CEAA, outlining the nature of their upcoming workshop and how they would prefer to have but one participant from the City as part of the working group, a spot for which Councillor Judy Carlick-Pearson quickly raised her hand so as to secure a spot at the session.

So fast was she on the draw, that she seemed to usurp the spot at the CEAA table that Mayor Jack Mussallem thought would be of interest to Councillor Thorkelson.

However, the Mayor should have no worries that his counsel had not been accepted, as Councillor Thorkelson declared that she had plans to be at the working group session and if they don't like it, the CEAA can apparently throw her out (if they dare we imagine).

Regardless, of the head count at that working group, the CEAA will apparently be providing the full Council with an update on their plans for LNG review, as in their letter they did offer to appear at Council for an information session.

To that suggestion, Councillor Thorkelson then outlined her thoughts on the issue, suggesting that the CEAA was being rather rude, treating the City as more of an interest group than a participant in the process.

From that declaration, she went on then to suggest that the CEAA should be invited to City Council Chambers to explain themselves.

You can mark down May 13th on your calendar for a possible showdown at the Corral, the second Monday in May's council session would seem to be the preferred date for the presentation, no doubt with some interesting questions from council as a follow up.

You can review Councillor Thorkelson's review of the CEAA letter and other items of interest related to the proposed LNG working group from the City's Video Archive (view here) , the time frame to work with is from the two hour thirteen minute mark to the two hour twenty one minute mark.

More on the CEAA's process for the Pacific Northwest LNG project can be found from their website.