While the City of Prince Rupert attempts to cobble together its budget for the mid May deadline, some members of Council will have a respite from those onerous tasks, as they head off to convention.

Representatives from the North Coast, both Municipal and from Regional District, took to the roads this week to make the trek to this years North Central Local Government Association gathering. Though no listings have been posted to any of the local government portals, as to how many and which representatives from the North Coast, were planning on making the trip south.

The three day conference is taking place in Quesnel, with local government officials from across

Northern British Columbia gathering to examine issues of interest to all.

An opportunity to exchange ideas and commiserate for some we imagine, at the nature of local governance and the challenges that each community might be having at this time.

The conference will hear from guest speakers, hold workshops, host a trade show and consider a wide range of resolutions during the course of the three day conference.

Though it's not all policy work, included in the three day conference is a Thursday Banquet and a Golf tournament.

You can examine the full agenda of the conference from the NCLGA website. Or take a look at the entire sessions happenings, from the convention booklet that has been posted to their website.

In amidst the workshops and the guest speakers is a bit of pre-arranged work to be done, as the gathering considers a number of resolutions submitted by member cities over the course of this year.

Among those resolutions is one sponsored by the Skeena-Queen Charlotte Regional District which has offered up the Topic of Emergency Notification as a subject for discussion. 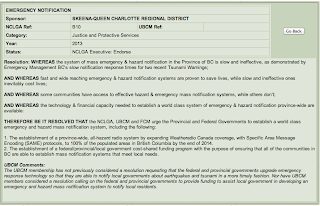 The City of Prince Rupert is offering three resolutions for discussion at the Convention.

A discussion and amendments to the Community Charter/Local Government Act, a subject that was clearly brought forward for discussion with the Watson Island situation on the City's mind. 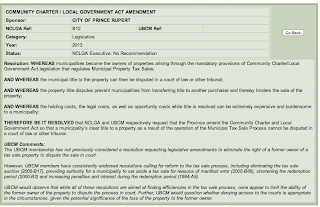 The City also introduces a resolution calling for the Provincial and Federal Governments to increase the basic support allowance give to individuals on disability, welfare and/or Old Age Security.

The City's final resolution for the Convention is one that asks for the Standardization of Social Assistance Rates.

Port Edward has a joint resolution with Vanderhoof, seeking for better maintenance and upgrades for Highway 16. 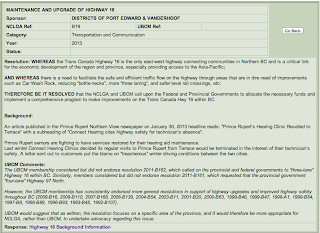 You can review all of the Resolutions from the NLGA convention website.

You can also follow along with some of the developments from the NCLGA twitter feed.
Posted by . at 10:02 AM