We suspect that Elwood and Jake would be impressed, CN Rail is in the midst of enhancing it's Intermodal Terminal in Joliet, Illinois, a project announced in January, which will build in part on the connection from Prince Rupert to ship goods into the US Mid-West.

The 30 acre facility currently in the final stages of construction will employ up to 30 people when completed and will see an estimated 175 trucks a day pass through the gates to pick up containers, many of which may arrive from, or be destined for the Port of Prince Rupert.

And while the expansion of a port in Illinois probably isn't of much interest to Rupertites, it's development is based mainly on the success of CN's container runs from Canada into the US midwest.

The expansion of such terminals in Joliet and other US inland ports serve a dual purpose for CN.

Beyond the prospect of increasing its transportation hub in the USA, the creation of jobs and infrastructure makes a nice counter argument for the railway (and Canadian ports like Prince Rupert) whenever US Ports put forward their arguments over competition from Canada.

With jobs always an important aspect of any discussion, some of the rhetoric from the US west coast port lobby may get diminished, as through put from ports like Prince Rupert create employment and investment opportunities in the US.

A twitter post last week from CN Rail outlined the progress of the project in Illinois. It is expected to open up for business in June. 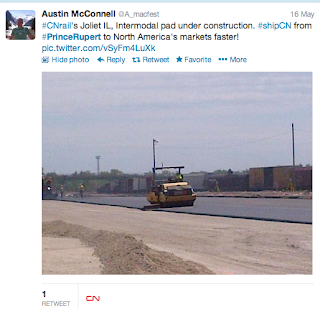