Chinese investigation continues into official with ties to Sun Wave 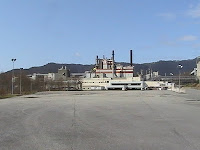 Some interesting news from China on the ongoing legal issues for some names familiar in Prince Rupert's Watson Island pulp mill story.

Developments that continue to provide for much in the way of mystery, but for the moment little in the way of closure in any form.

Yesterday, two different news groups provided some background on the nature of the ongoing investigations taking place in China regarding a top Chinese official, one who has connections to the owner of the Sun Wave holdings.

The New York Times featured a look at the investigation being conducted by China's top anti-corruption agency,  an investigation into what are called "serious disciplinary violations".

It is a government review which has been spurred on after a Chinese journalist challenged investigators on a number of key points in the case of Liu Tienan, a senior economic policy maker in the Chinese government.

The increased interest in Mr. Liu's is considered a sign that the new Chinese Leader Xi Jinping is using the investigation to show his dedication towards cracking down on any perceived corruption in Chinese Circles.

With that development made public, The Globe and Mail continued on with its extensive review of the connections between the Chinese official and businessman and the Prince Rupert pulp mill site, with a look back at the impact those relations have had on the political scene in BC as well.

Of particular interest is the recap of the investigation currently underway regarding Lui Tienan and his past interactions with Ni Ritao, the Chinese businessman who is the main investor of the thus far failed attempts to restart a pulp mill on Watson Island.

The Globe once again recounts, the burden that the Watson Island Mill situation has put on the City of Prince Rupert since the Sun Wave saga began.

A situation that would appear to be still in a state of some flux while Chinese Justice continues to play out, as part of a larger government campaign.

With what appears to be a major investigation underway in China, it would seem to leave Prince Rupert with little information for now, as to how it all may impact on the current discussions between the City and Sun Wave officials.

Leaving that file to be an ongoing concern, with the much desired need for closure still it seems a bit off in the future.

The Georgia Straight also picked up the theme of the ongoing controversy, condensing the two articles of note, while highlighting some of the key aspects from each.
Posted by . at 2:47 PM