The latest in public demonstrations of sorts against the prospect of those tankers full of Enbridge bitumen comes up tonight, as some members of the Winnipeg based folk-pop group Red Moon Road will arrive in town to film a video and conduct a community sing a long.

A note on their Facebook page (see more here) outlines the nature of their interest in the topic, which was inspired by their last trip through the Northwest.

The group will share their latest effort on the topic tonight,  returning to the North Coast for a performance of the Anti-tanker sing a long the Enbridge Pipeline Protest Song, which gets underway at 6:30.

Part of their Facebook notice issues the call for speakers, drummers, dancers and of course singers for the chorus for the evening of entertainment and video-making.

In addition to their plans for Mariners Park on Thursday night, those members of the group participating (one member recently broke her leg and had to return home) plan on holding video shoots in other sections of the city.

You can learn more about the band from their website, or from the entry on the SuperSonic website. 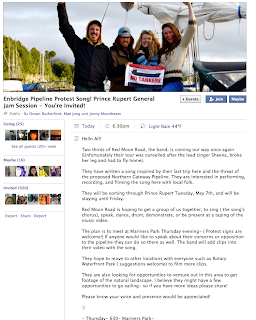