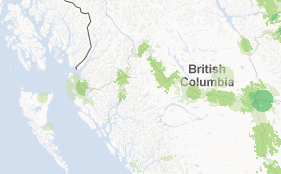 It's a favourite topic of Councillor Nelson Kinney of late, concern over the long stretches of highway without cellular service between Prince Rupert and Terrace, one he raises whenever CityWest makes it's public appearances at City Council sessions.

And while the stretch of highway between Rupert and Terrace is of course a key concern for North Coast residents, the issue of cell service across all of rural Northwest British Columbia is getting a review, this one on the pages of the publication Business in Vancouver.

The lack of, or limited nature of cellular and Internet access in many communities is the focus of an article from Joel McKay, which looks at the terms of a 2011 agreement, which is in place for ten years, as well as the aspects of the service to be provided by Telus for the provincial government (see contract here ).

The agreement with Telus is a 1 billion dollar service contract to provide  extended cell coverage and increase Internet access in rural and remote communities across the province.

A wide expanse of Telus territory that at the moment seems to be creating large gaps in Northwest British Columbia service.

In particular, there is a major concern over how to better provide service to Haida Gwaii, which currently is straining the capacities of their over the water radio transmission system.

The solution to that problem would be an underwater cable across Hecate Strait, but at a cost of close to 10 million dollars, that would seem to be a project that would very much be of a far in the future prospect.

The commitment to Telus from the provincial government has also raised concerns from a number of regional service providers, including Prince Rupert based CityWest.

Business in Vancouver revealed some of the CityWest concerns by way of a Freedom of Information request, highlighting the comments of CityWest to the provincial government.

Concerns which for the most part outlined the CityWest argument that the 10 year deal with Telus would hurt rural telecommunication companies and their customers.

"By supporting rural providers who operate in underserved regions we ensure that more of the money is invested in the regions and goes to the rural residents it is intended to benefit," CityWest argued in its letter to the province, which was later released via Freedom of Information.

"The implication is that the government has had to dangle the metropolitan business as an incentive to force Telus to serve rural B.C.; that our dominant carrier needs to be dragged kicking and screaming into these rural markets."

CityWest had company at the complaint window over the Telus contract, Whitehorse based Northwest Telalso outlined their own mis-givings over the government contract with Telus.

CityWest an Northwest Tel have had common ground and like minds before, CityWest signed a partnership agreement with NorthwestTel in 2007 to launch wireless data services with CityWest.

That arrangement has at times provided for suprises for Prince Rupert customers, in September 2012 a disruption in Yellowknife, knocked CityWest cellular and data service out for four hours.

The Business in Vancouver review, makes for an interesting review of the ever changing nature of the telecommunications system in Northwestern British Columbia.

Examined in the prism of CityWest's recent declarations to City Council about it's operations  in the Northwest, the article provides us with a bit of a window as to the costs, challenges and competition that the city owned communications company is facing in these changing times.

You can read the full Business in Vancouver article here.

More background on the issue of communication in the Northwest can be found in our Communication archives.

Email ThisBlogThis!Share to TwitterShare to FacebookShare to Pinterest
Labels: Business in Vancouver article May 2013, Cellular and Internet service issues in NW BC