With warmer temperatures inland and precipitation arriving from the Pacific, the Rivers Forecast Centre has begun to issue some high stream flow advisories for portions of the Northwest.

Thursday morning an Advisory was declared for the Stikine and Dease Rivers and the surrounding areas around them.

The High flow conditions are expected to continue to occur through northern British Columbia, while it's anticipated that temperatures will ease up over the weekend, there is precipitation on the way with the potential of 20 to 30 mm of rain , which could result in rising rivers.

Yesterday, Highway 37 North was closed in both directions 12 km north of Dease River Bridge because of flooding, Drive BC had no time frame as to when the highway north would be reopened to traffic.

BC Transportation provided the following photo of the Flood zone posted to their #BCHwy37 twitter feed. 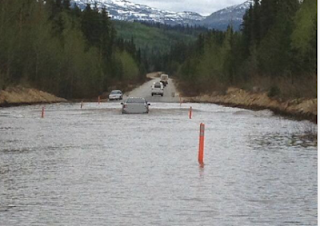 You can gain the latest updates from the Rivers Forecast Centre website.

Email ThisBlogThis!Share to TwitterShare to FacebookShare to Pinterest
Labels: High Streamflow warning for Stikine River and Northern BC