The Prince Rupert Port Authority announced another successful applicant from its Community Investment Fund on Tuesday.

As the Prince Rupert and Region Music Society received a $250,000 donation towards the construction of a new multi-use music studio at Charles Hays Secondary School.

The Port's contribution of the 250,000 dollars covers a good portion of the estimated $762,000 construction project, which is currently underway on the front east section of Charles Hays Secondary on Prince Rupert Boulevard.

Other community partners in the project include School District 52 which is putting $250,000 towards the project, with Ridley Terminals providing for $100,000. A number of other  businesses, groups and individuals are making up the remaining total cost of the project. 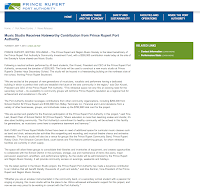 The Port had this review of today's announcement, which featured a salute to the Community's dedication to the Arts by the Port Authority's President and CEO Don Krusel.

The Port's Community Investment Fund has provided for many ongoing projects in the region as you can review from our archive of past contributions.

This year the application period for proposals ran from January 7th to February 15th, with today's announcement, the first result for those groups that put in their applications.
You can learn more about the Community Investment Fund from the Prince Rupert Port Authority's website.