Another contentious Commercial salmon season ahead 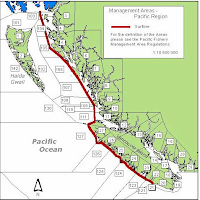 The first of the salmon have yet to be landed at the processing plants, but already the summer of 2013 is looking to be a controversial one between those that fish for a living and those that watch over the stocks.

The line across the water seems to have been drawn on the issue of tracking their catch, by way of a new monitoring program.

A system of information gathering that has clearly annoyed members of the North Coast fishery and a system that will cut into their income.

An income that is already at risk owing to management plans, reduced fishing opportunities, fluctuating remuneration from fishing companies, as well as rising costs to boat owners.

The backlash to the new requirements was quick this week, as UFAWU's representative on the North Coast Joy Thorkelson (also a City of Prince Rupert councillor) held a media opportunity to highlight the concerns of the fishing fleet of the North Coast.

At her gathering, she was joined by Mayor Jack Mussallem, who lent his name and office to the cause of the fishing fleet.

The NDP Member of Parliament for the region, Nathan Cullen also weighed in with commentary on the latest edicts of the Department of Fisheries, declaring that the Conservative government is "hell bent" on destroying the commercial fishery.

What seems particularly unfair to the Northern fishing fleet about these new requirements for monitoring, is that they are seemingly only to be in place on waters surrounding the North Coast.

Another flashpoint on the issue is that while the Commercial Fishing fleet is required to take part in the monitoring program at their own cost, the recreational fishery is not required to have a similar program in place.

That discrepancy could very well set the stage for further controversy as the fishing season gets underway.

There was no declaration of future intent on the issue at this weeks gathering, but clearly the local fishing fleet is not happy with DFO, something that is not an uncommon theme at this time of year.

What their next move is remains to be seen, however, it would appear that this summer is shaping up to be another controversial one when it comes to issues of the Fishing industry.

Background on the policies and procedures of DFO can be found at the DFO website.

You can review our past items of interest on the Fishery from our Archive page.