The Search is on at School District 52

The quest to find a replacement for departing Superintendent Lynn Hauptman has commenced as the Prince Rupert School District provided a few items of note on the process ahead at its last meeting. 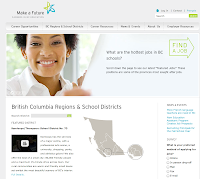 In a media release issued by the School District on May 14th, SD52 advised that they will be making the use of the services of Make-a-Future, a provincial data base and jobs posting service for teaching professionals.

The timeline for replacement doesn't appear to be of a short term period, as the School District's release advised that the new superintendent will be announced over the summer.

Ms. Hauptman's departure for the Southeast Kootenay's was announced on April 23rd, with Board Chair Tina Last providing the tribute to the departing Superintendent's work in the community as part of the announcement.

We offered up this review of those developments, with this item on the blog back on April 25th.

Left unsaid in both items released to the media, was whether the School District would be making use of a consultant once again in the search for a new Superintendent.

Consultant's fees have proven to be a rather controversial topic over the last few years when it comes to the School District. So the prospect of more consultation (should it be required) to guide the School District through this latest required changeover, would no doubt be of interest to observers of School District spending.

In addition to the School District announcement on the search for Ms. Hauptman's replacement, the Board also announced that the 2014 Annual Budget had been passed.

That after Board members  reconsidered the controversial succession plan that had been offered for consideration by Ms. Hauptman, prior to her departure.

At the April 9th meeting of the School District Board, that plan was panned by four number of the trustees, which resulted in the need to reconsider it all, with the benefit of a four day break.

As events played out at the May 13th meeting, the Board voted to reconsider Ms. Hauptman's proposal, turning it down, and with it for now we imagine, plans to increase the number of vice principals in the District.

PRDTA President Joanna Larson provided some play by play of those deliberations of May 13th, by way of her twitter feed, highlighting the nature of the discussion as the Board weighed the issue of the succession planning. 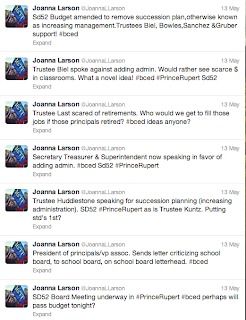 Those looking for the fine print and details on the Budget for the year ahead are advised to watch the School District website, where the approved budget will be posted "in the near future".

You can review our items of note on School District Developments from our Archive page.

Update: The Northern view outlined the discussion points from the May 13th meeting, posted to their (e edition on May 22nd pg 8).
Posted by . at 9:52 AM