City of Prince Rupert Property Tax Bills are in the mail

Rupertites may wish to approach their mailboxes with trepidation over the next few days.

For sometime this week awaiting your review, will be the 2013 Property Tax Bill from the City of Prince Rupert.

The annual accounting of your cost for living in Prince Rupert, arrives after a lengthy budget process for the Mayor and his council, a process which started in January and did not wrap up until just before the May 15th deadline.

As he outlines in his Message from the Mayor, the path to this years Budget and your Property Tax Bill provided for many a struggle for Council.

In his review, the Mayor outlines the nature of requests from a variety of community groups for grants,  he touches on the the reduction on the tax rolls this year from the loss of two fish plants and the impact those closures had on Assessments from BC Assessments.

He points towards unused monies from 2012 being put towards the 2013 budget and how Council and staff reviewed city budgets to lessen the 2013 tax burden.

And while he doesn't make mention of that closed door arrangement between the City and its workers ( a deal that still seems rather steeped in mystery, but the terms of which apparently shall not be shared with the public) he does take time out in his message to salute the dedication and work of the City's employees and staff during this period of tax decline.

On the topic of CityWest and the missing dividend of this Budget review period, the Mayor reprised the CityWest talking points of their recent appearance at Council, (which we reviewed on the blog in April see item here) suggesting that while CityWest tries to grow the CityWest brand, the prospect of dividend returns may be missing from city coffers for a number of years to come.

You can review some of background on those discussions and many others, through our archive of Council items over the last year.

Our Archive on Budget Issues here and our past items on the General Discussion points for Council can be found here.

And while you sit down with your calculator to try and figure out the changes from year to year in your property tax bill, the City has provided a breakdown, to provide a thumbnail guide as to where some of that tax money we are providing is directed.

Using an average assessment of $168,700 as a guideline, the City allocates your tax dollars as follows.

In addition to the breakdown on municipal expenses, the City outlined the allocation of tax revenues on behalf of other taxing agencies.

The residential tax bill allocates the following percentages towards those agencies.

The tax bill is due July 2, 2013, mark it down on a calendar and set an alarm for it, homeowners won't want to miss that deadline!

The penalty on unpaid taxes after July 2nd is 10%.

Home Owners who qualify for the Home  Owner Grant, can submit their Grant application with their payment before the due date.

The two page insert with this years tax bill can be found below, click on the image to enlarge it. 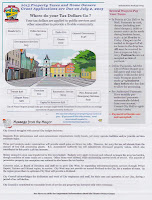