The three day conference took place in Nanaimo this year, featuring a number of activities and information sessions for Chamber members.

The conference wrapped up with the celebrations of excellence, and among the province's Chamber of Commerce representatives in attendance at the gala finale, the Prince Rupert Chamber was celebrated for its achievements in the past year.

The Prince Rupert Chamber of Commerce was recognized by the B. C. Chamber, for holding to its vision of service to the business community, in very trying economic times over recent years.

The Prince Rupert Chamber posted their own message to twitter on Monday, celebrating their success with a photo which includes a name and face quite familiar to the North Coast. As Gloria Macarenko celebrated the award with the Prince Rupert delegation of Jason Scherr and Simone Clark. 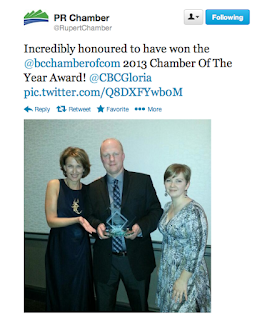 The Northern View offered up this recap of the Chamber's success in Nanaimo this weekend.

Business in Vancouver magazine also heralded the Prince Rupert Chamber's achievement with this article.
Posted by . at 8:31 AM