Famed Musical Ride returns to BC, but the closest they'll get is Prince George 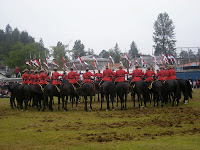 As the RCMP celebrates the 140th anniversary of its founding as the NorthWest Mounted Police today,  more details are being revealed as to the nature of this summer's tour of British Columbia by the Musical Ride.

The famed equestrian unit, which appeared in Prince Rupert in June of 2009, has a full schedule of dates pencilled in for British Columbia, but for those in the Northwest looking to take in a show, a road trip will be required to take in the celebrations.

With the release of their 23 British Columbia destinations, the closest that the Musical Ride will get to our region is a two day stop-over in Prince George July 13 and 14 when they perform at the CN Center (ticket information here).

From there it's trails south as they work their way through the Central Interior with stops in Quesnel and Williams Lake, into the Okanagan, Lower Mainland and Vancouver Island with a stop planned for Port Hardy on August 7th.

You can find the full itinerary for British Columbia from the RCMP's website.

More details on the Summer Tour of the Musical ride can be found here.

The Musical Ride recently was featured in the news with the introduction of a lawsuit from a former member of the Ride, a situation that the RCMP addressed on its website yesterday.
Posted by . at 3:58 PM

Email ThisBlogThis!Share to TwitterShare to FacebookShare to Pinterest
Labels: Musica Ride returns to BC for tour this summer