Campfire ban extended in some regions of the Northwest 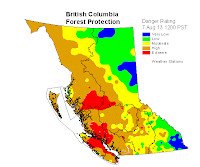 For campers across the Northwest, the prospect of a campfire as part of your camping routine will be off the list of things to do for the near future, the Northwest Fire Centre has issued a Campfire ban in a number of regions of the Northwest.

Effective at 4 p.m. on Tuesday, Aug. 6, 2013, all open burning (including campfires) will be prohibited in the Nadina, Bulkley and Skeena Fire Zones, with the exception of the former North Coast Forest District within the Northwest Fire Centre's jurisdiction to help prevent human-caused wildfires and protect public safety. This prohibition will remain in place until Sept. 15, 2013, or until the public is otherwise notified.

The full advisory on Open Fire and Campfire Bans can be found here.

In addition to the Campfire Ban, the Wildfire management Branch provided an update on the wildfire situation across the Northwest on Wednesday, an advisory that counted 40 new fires in the last six days across the region, primarily in the southern and eastern edges of the region.

As we outlined on the blog on Tuesday, the largest fire is the Kitwancool Fire, a 10 hectare blaze about 3.5 kilometres east of Highway 37 near Kitwancool Lake. Officials believe that it is now approximately 60 per cent contained.

Since then two other fires have captured the attention of Northwest Region officials, a fire in the Kitseguecla West region, which is estimated at 3.4 hectares with a 20 person crew dispatched to battle it.

Two fires northwest of Francois Lake have also been addressed by ground crews and air tankers and are considered 100 per cent contained.

You can review their updates on those fires from the Wildlife Management website.


Residents and travellers across Northern British Columbia are asked to report any wildfires and unattended campfires, you can reach the Wildfire Management Branch at *5555 on cellphones or toll free at 1-800-663-5555.

You can keep up to date on Forest concerns through the Wildfire Management twitter feed and facebook page.
Posted by . at 9:08 AM

Email ThisBlogThis!Share to TwitterShare to FacebookShare to Pinterest
Labels: Campfire ban extneded in some regions of the NW