Even in tough economic times, Payday is still a good day for the City! 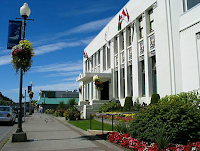 While much has been made from City Council to work smarter, control costs and all of the other fashionable approaches to financial management, a quick review of the figures from June's Statement of Financial Information, shows that in tough times or good, it's seemingly still a rewarding gig to have some City Work.

The topic of a growing municipal workforce and the cost of it to the taxpayer has been a rather heated debate in other British Columbia communities of late, with the seemingly growing expense of municipal services one of the top issues in many towns and cities in the province.

In Prince Rupert, that discussion over staffing levels and any potential reductions to them during the budget considerations was a short lived one, brought to an end almost as quickly as it was taken up.

At the end of the City's lengthy budget process, the City presented a financial plan which provided for a 1.5 per cent tax increase, a reduction of a minimum of 150,000 dollars  from the Budget and tapped the Accumulated surplus to a figure of 532,00 dollars. (You can review those deliberations from our City council timeline for May 9).

All of which made for some interesting reading from the City's Property tax mail out this year.

And while much was spoken in May about keeping a focus on the financials, belt tightening does have some room for flexibility it seems.

In Prince Rupert a comparison of the figures for 2011 and 2012, show that even in times of financial concern, the workforce making over 75,000 dollars per year has grown between the two reporting periods.

All be it by only two workers, but still, in an era where the City was quite concerned about its financials heading into their budget deliberations, the actual growth of the civic work force may raise a few eyebrows, especially of those that attended that much reported on public meeting of May 8th.

When you review the Financial Information provided by Acting CFO Corrinne Bomben in June of 2013 (page 16),  there were 47 Civic Employees making over 75,000 dollars a year, the cut off mark for financial reporting in the public document.

Compared to the report one year earlier, that makes for an increase of 2 workers above that financial cut off mark, in his 2012  report then CFO Dan Rodin's Statement of Financial Information (page 137) accounted for 45 employees making more than the 75,000 mark.

Framed in the debate of May over the budget and how to address the financial concerns of those discussions, it once again calls attention to that arrangement between the City and CUPE that was reached behind closed doors.

Details of which have never been released to the public, as to what was involved in the arrangement and how they provided for cost savings to the City.

It was a controversial decision at budget time, spurring a discussion on the issue of secrecy at City Hall that still resonates into the summer.

The topic of a large (and seemingly growing) civic payroll was a subject of some discussion one year ago, when the Northern View provided a comparison to the municipal payroll just one city to the east.

At that time, the newspaper reported that the payroll for employees making more than 75,000 dollars in Prince Rupert was more than double that of Terrace.

One imagines that if the same comparison was to be conducted today, the results would most likely be much the same. Though the budget discussions in Terrace in the last year, were nowhere near as lengthy, nor was it as controversial as that  which Prince Rupert City Council conducted.

Those numbers from the  2011 and 2012 Statements of Financial information don't include workers for CityWest.

Which, while a corporation that the City of Prince Rupert is the sole shareholder of, doesn't apparently count towards the employee rolls when it comes to  civic salary, expenses and obligations. (past pension obligations may possibly be a different matter worthy of a look one day).

If CityWest was still considered under the City of Prince Rupert umbrella and reporting its employee count to the City, the numbers of on the listings would even be higher, than those that Ms. Bomben's document to Council has outlined.

As mentioned earlier, the topic of municipal expenses has become a talking point across the province. A flash point for discussion as municipalities try to balance their budgets, at the same time trying to hold the line on expenses and tax increases.

The common theme from most of the communities being that the tax base is spread too thin to cover off the growing costs of municipal services.  A situation that seems to be putting much in the way of pressure on municipalities across the province, most of which are in considerably better financial shape than Prince Rupert.

As we outlined on the blog earlier, being part of the civic work force isn't the only place where a financial bump can be found. As the 2012 Statement of Financial Information documents highlight, Prince Rupert's Council leads the Northwest in financial remuneration, all while the financials of the community have continued to be a bit of a struggle and have been well documented.

With the events of May still fresh in our minds. The confidence level for local residents regarding the local financial burden, has perhaps been tested a fair bit in recent months.

Especially when the civic government makes an arrangement behind closed doors and then doesn't explain what has taken place to those residents, who that at the end of the day pay the bills.
Posted by . at 11:30 AM