The price of democracy is a little higher on the North Coast than in other Northwest communities, as a study of Financial Information statements from Prince Rupert, Terrace and Kitimat, show that Rupert's elected officials are leading the region in compensation and expense allocations.

Municipalities are required to produce their Financial Information in a timely manner each year, outlining the remuneration and expenses that their elected officials incur. A helpful accounting (in some communities a harder to find accounting than in others) of the burden on the civic treasury that governance can provide for.

This year the numbers as of December 31, 2012 show that in Prince Rupert the salary at the top has increased, as Mayor Jack Mussallem increased the take home by some 10,000 dollars.

Prince Rupert City Council members in 2012 collected a base salary of $13,165 with the exception of Councillor Kinney who is recorded as receiving $13,729.

With expenses, the Council members Total Remuneration and Expenses for 2012 comes in at the following amounts:

The key Charts for both years can be found below 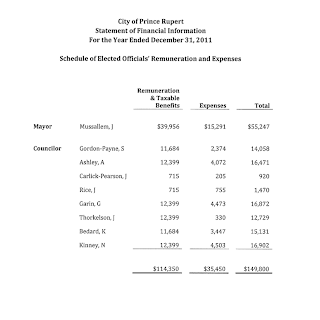 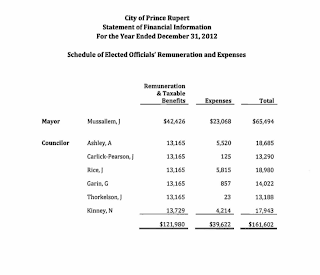 Those numbers are good enough to put Prince Rupert atop the municipal listings, when compared to the remuneration paid to elected officials in Terrace and Kitimat.

In Terrace , the Terrace Standard provides the details on financial remuneration, with Mayor David Pernarowski having earned $31,202 with expenses of $5,764.30 making for a total of $36,966

You can gain some background on the nature of government with Terrace council from this article from the Terrace Standard.

Northwest residents perhaps can be thankful that they don't have the financial load handled this year by Prince George taxpayers.

That's a bounty of payroll that did not escape the eyes of the Prince George Citizen.

Though it should be pointed out that they have a population base roughly seven times larger than Prince Rupert and a much larger industrial base to call upon for taxation.

A case where bigger may not be better, but clearly is a tad more expensive to govern.

Email ThisBlogThis!Share to TwitterShare to FacebookShare to Pinterest
Labels: Municipal renumeration in the NorthWest