Moderate earthquake rumbles off the West Coast of Vancouver Island 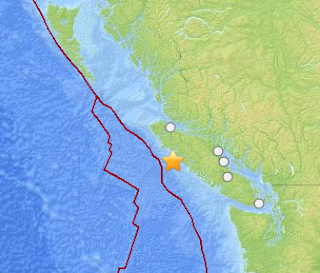 An early morning wake up for residents of Vancouver Island as a 5.7 magnitude earthquake rattled along the West Coast of the Island Sunday morning.

The moderate quake, which was reported at 6:22 AM, was located 108 kilometres South of Port Hardy, 155 kilometres West of Campbell River.

The closest community to the earthquake epicentre was Port Alice.

The depth of the Sunday morning temblor was recorded at 10.0 km.

No damage has been reported and No Tsunami Warning was generated from the seismic event.

It was the fourth significant temblor in that region in the last month,  A pair of quakes in the 5.0 range rattled an area North of Port Hardy on July 27th and a previous 5.0 quake  struck the same area on July 26th.

A 4.0 earthquake shimmied along Haida Gwaii on July 16th.

Update: The earthquake was later downgraded to a magnitude 5.3

Our archive of seismic reports can be found here.