To the Closed chamber for a Thursday 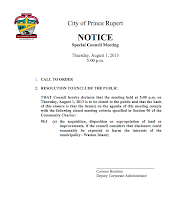 With a leaky pipe and a bit of fuel, making for a bit of drama at Watson Island, the City's Mayor and councillor's (or as many as can be rounded up on short notice) shall be meeting at City Hall Thursday evening to discuss events at the industrial site.

The Notice of Special Session went out on Wednesday, advising the public that Council shall meet, with the first resolution to exclude the public from the session.

The closed meeting called under Section 90 of the Community Charter to consider items relating to one or more of the following:

In this case the acquisition, disposition or expropriation of land or improvements, if the council considers that disclosure could reasonably be expected to harm the interests of the municipality - Watson Island.

The session seems to have become necessary to discuss the latest of events at Watson Island.

That in the wake of the revelation in the local media, of an environmental issue at the industrial site, a report which we outlined some background on earlier in the day.

The Special session has been called for 5 PM on Thursday evening, however, with it closed to the public, we most likely will only learn what will be discussed, should the Mayor and council choose to share some snippets of their deliberations.

Which isn't something that usually provides for much in the way of a full review of their in camera work.

Perhaps they could at least advise us as to who was able to make the session, we're pretty sure that an attendance record is not likely to harm the interest of the municipality.

It's the second time that Council has interrupted their extended summer break to meet in session, they last  met in Special session on July 25th, only to break off into an unplanned Closed session immediately following it.

Unlike that event, this time Council provided a bit of lead time and notification, as to their requirement of an impromptu, in camera session.

You can review, the Notice and the Agenda (such as it is) from the City's website.
Posted by . at 5:03 PM