The Port is ready for its close up! 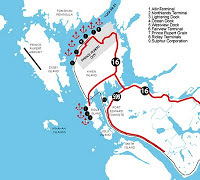 The latest in port development and some of its greatest hits, are now being told to a world wide audience as word of the potential of the Port of Prince Rupert spreads through a number of video presentations from a company called True North.

The latest of the information items, is a view of the Container Port with Prince Rupert Port Authority President and CEO Don Krusel explaining the Port's 2020 Gateway vision.

You can view his talking points on the future of the Port here.

In addition to Mr, Krusel's overview of the Port's potential, True North produced a variety of other videos which highlight much of the industrial footprint of the Prince Rupert economy.

Among the contributions to the video hit list, are short snippets of information on various Port related operations.

The ILWU, outlining the impact of the Container Port on the local economy (view here)

The videos are part of campaign to herald the importance of Canada's Pacific Gateway, with five other videos from the True North Entertainment Group highlighting that growing transportation corridor.

While the message for the most part is the one that the province and federal governments want to have delivered to the world (the various themes do sound familiar from past appearances).

The main benefit to the Northwest will be the focus on Prince Rupert that the videos provide for,  a helpful addition to the inventory of items that highlight the Port's potential and help to spread word of it's opportunities.
Posted by . at 8:46 AM