The media release office of the Canadian Environmental Assessment Agency was busy this week, with a pair of announcements regarding two LNG proposals for the North Coast. 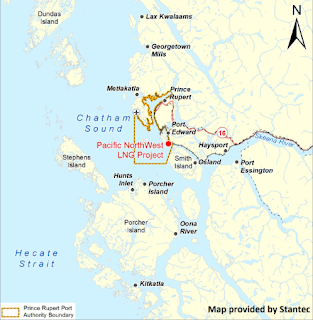 The first deals with the Pacific NorthWest LNG Project, with the announcement that the deadline for Public Comments has been extended  to September 20, 2013.

As well as that extension of deadline the CEAA also revealed that the Agency is making funding available to support the participation of the public and of Aboriginal groups in the Federal Environmental Assessment of the Pacific Northwest LNG Project.  The deadline to submit an application for funding has also been extended to September 20, 2013.  Those individuals and groups how have already submitted an application do not need to re apply.

Background on the Participant Funding Program can be found here.

Details on the twin announcements regarding Pacific Northwest LNG can be found here. 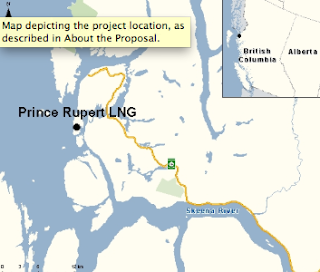 The CEAA also released details regarding available funding for the Prince Rupert LNG project, with funding being made available for members of the public of Aboriginal groups to participate in the upcoming stage of the environment assessment.

Those wishing to participate in the process of Assessment for the Prince Rupert LNG project can make an application  to the Participant Funding Program. The deadline for application regarding this project is September 27th.

Background on the Participant Funding Program can be found here.

Details on the Prince Rupert LNG project Funding announcement can be found here.

Successful applicants and the amount of funding for both projects will be announced at a later date.

For a review of all of the proposed LNG projects on the North Coast we have a project by project breakdown available on our archives here, as well as an overall listing of items related to LNG development here.
Posted by . at 8:54 AM