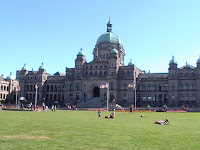 The cost of representation in Victoria is it seems a little steeper from the North Coast, at least, if the expense numbers for July, as submitted by NDP MLA's at the Legislature are any indication.

Beyond the base salary of $101,859 for an MLA, our representatives in Victoria are entitled to submit expense claims for a variety of costs incurred while working on our behalf.

A task that Jennifer Rice, the North Coast MLA was quite diligent at in her first session at the Legislature.

For the short summer gathering of July, a month that featured but fifteen days of Legislature sessions, the North Coast MLA, is by far leading the pack when it comes to expenses claimed in doing the work of the people in Victoria.

On Thursday, The BC NDP issued a press release and revealed the expense claims of July from their 34 MLA's, a listing that has Ms. Rice, atop the expense listings, having submitted an expense claim of $9,283.74.

Based on total expense claims for July of $90,990 from all 34 NDP MLA's, that would make Ms. Rice's listings account for almost one tenth of all of the rest of the NDP MLA expenses in total for the month.

The majority of her expenses seem to be related to travel (airfare)  and accommodation requirements. While Taxi fares, miscellaneous transportation, occasional meals and the Per Diem for MLA's make up the remainder of the total amount.

The Breakdown as per the NDP Expense claim is as follows:

For those that like to sharpen pencils and make notes, the full review for MLA Rice can be found on the NDP claims report here.

The next closest NDP MLA to Ms. Rice was George Heyman of Vancouver-Fairview, who submitted expenses totalling $5,295.59

As for the NDP's two other Northern BC MLA's, who perhaps have as great a travel and expense requirement as that of the North Coast, the total expenses from July appeared as follows:

Not surprisingly, those MLA's that live closer to the Legislature had the lowest expense claims submitted, but with former NDP leader Carole James and fellow Victoria area MLA John Horgan both submitting claims of but 54 dollars each, the range in the numbers from lowest to highest, is going to be a bit of an eye opener for more than a few residents across the province.

You can examine each of the NDP's expense claims listed riding by riding here.

As of yet, the BC Liberal's have not posted their expense claims for the same period to their website.

The local media offered up these items on the expense revelations.