The Canucks are heading north 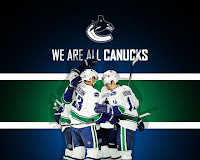 For three days in September, North Coast residents can truly claim that "we are all Canucks".

The Vancouver Canucks have announced that the NHL team will be making a special team visit to the North Coast, spending three days on the North Coast from September 7th to 10th.

Following that ceremony, the Canucks will take part in a fan meet and greet in partnership with radio station CFNR, which is offering up the opportunity for listeners to attend that session. (see details regarding the meet and greet here)

On Tuesday, the Canucks head to Old Masset on Haida Gwaii, where they will receive another official welcome at the Old Masset Community Hall.

The trip to the North Coast is part of a team activity at the West Coast Fishing Club, a team bonding experience that will prepare the Canucks for their 2012-14 season.

You can learn more about their trip north from this press release from the Canucks.
Posted by . at 12:16 PM