Highway 16 closed at Vanderhoof due to vehicle incident

Summer travel along Highway 16 west of Vanderhoof will get a bit of a detour as Emergency officials deal with a vehicle incident on the highway, which has resulted in its closure 21 kilometres west of the community.

The first media report out of Prince George outlined that it was a two vehicle collision between a passenger car and a semi west of McNulty Road on the outskirts of Vanderhoof.

A detour has been established around the site of the incident.

Update: Highway was reopened to traffic at 9:36 PM 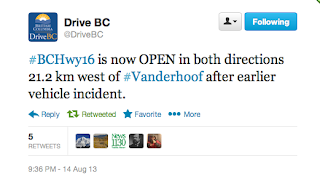 Email ThisBlogThis!Share to TwitterShare to FacebookShare to Pinterest
Labels: Highway 16 closed at Vanderhoof due to vehicle incident August 14