RCMP seek guidance of council on long board issue

One of the frequent topics of discussion around the Council chamber this summer has been the increasing amount of long boarders on the streets of the city, a few of which don't seem to have much in the way of concern for personal safety or civic minded behaviour.

To address that issue, the RCMP made a presentation to Monday's council session as Constable Maury Tyre provided an overview of the current situation in the city as well as offering up some thoughts for council to consider, as they seek to move the issue forward.

Forming his presentation as a way of seeking guidance from Council, the constable offered up a number of themes on safety for the long board enthusiasts, possible enforcement actions and the prospect that perhaps some streets in the city could feature a ban on such activities as long boarding and roller blading.

The full review of his presentation can be found on our City Council timeline, with the City Video Archive hosting his almost 20 minute review as well. The Constable's time with council runs from the 20 minute mark to the 38 minute mark.

The main thrust of his discussion was to seek out better communication with the long boarders, perhaps hosting a safety session and to engage with the School District to provide information on the quest for safety on the streets.

He did suggest that with the long board season almost at an end as the fall approaches, that much of the work ahead would be to plan for the Spring and a comprehensive approach to the issue.

Among some of the key points that he would like to see Council consider is whether they wish to have a complete ban of the long boards on city streets or perhaps seek out a combination of safety education and bylaw enforcement as an answer to Council concerns.

Towards the latte aspect he offered up the prospect of Council providing for an information campaign regarding potential fines for offences, with a warning period to introduce the concept, followed by a set date for enforcement of the fines, while he outlined that the current fine would be around 25 dollars, Councillor Carlick-Pearson expressed the thought that the amount may be too light and suggested an escalating scale of fines, with eventual confiscation for repeat offenders.

She also suggested that the monies collected from any such fine be put toward a fund that would provide for helmets for those in the community that can not afford them.

As for the prospect of road closures, the Constable recommended three main areas of concern, that being all of McBride, Second Avenue West from McBride to Park Avenue and all of Park Avenue. 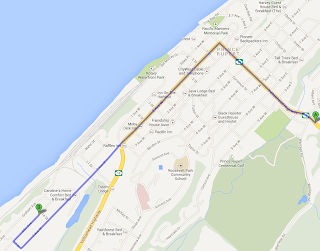 Councillor Carlick-Pearson also suggested Smithers street as a possible street to consider, while Councillor Thorkelson recounted her concerns over long boarding on Sixth Avenue East and onto Drydock road.

Councillor Ashley, who had been championing the need for a civic approach to the issue also offered up her thoughts that perhaps the issue of long boarding at night should be reviewed by Council.

The report was received by Council with their thanks and the project was put forward to staff for further consideration and review by Council in the fall.
Posted by . at 11:37 AM