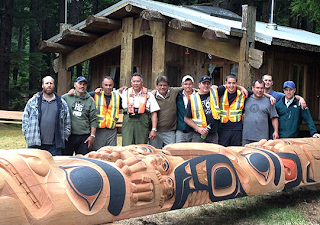 The carving of a totem pole in Southern Haida Gwaii is gaining much in the way of national attention, as work continues on the 42 foot red cedar legacy pole  marking the creation of Gwaii Haanas National Park Reserve.

The team of carvers is headed by Haida carver Jaalen Edenshaw, who has gained recognition for his previous works both on Haida Gwaii and elsewhere.

He put together his carving team after his proposal was selected by  a six person selection committee.

That committee accepted bids for the project with no names attached and made their final decision by way of storyline and design.

Edenshaw and his team have been working on the creation for the last two years, their design is seeking to merge the ancient with the modern, and is set to make its debut on the Islands, when it is put in place on August 15th at Windy Bay on Lyell Island.

Parks Canada has heralded the pole raising as the first in over 130 years for the Gwaii Haanas region, restoring a connection with the historic poles still standing in the nearby villages of SGang GWaay and Skedans.

.
.
The Pole is in celebration of the 20th anniversary of the Gwaii Haanas agreement, discussions and an agreement which put in place the protocols for the region to be designated as a National Marine Conservation Area Reserve and Haida Heritage Site.

As part of the commemoration ceremonies for that celebration, Parks Canada and the Council of the Haida Nation are providing a live streaming of the Pole raising on August 15th

They have also provided a background page on the Legacy Pole, which includes photos, information and a video about the progress of the carving.

The Council of the Haida Nation also has this short film feature posted to their website,  profiles of the carvers involved in the project, as well as a number of videos for review from their YouTube page.

Following the August 15th pole raising, there will be a Community Celebration on August 17th at the George Brown Recreation Centre in Skidegate.

The background on the story of the pole is gaining wide review across the country, with a number of news services providing a look ahead to the debut of the totem pole, you can review some of those items below.

(photo above from Parks Canada Website gallery)
Posted by . at 7:59 AM