.
Providing Mother Nature cooperates on Wednesday, Canada's famed air demonstration squadron the Snowbirds will make their much anticipated, (and somewhat delayed) return to the skies over Prince Rupert.

Wednesday's show, which will best be viewed from Mariner's Park, Rotary Waterfront Park or the Upper Level of the Rupert Square parking lot should once again provide thrills for Rupertites, who have enjoyed past appearances from the Canadian air team. 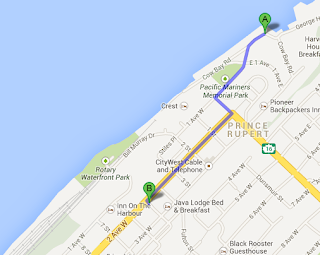 It will hopefully be a day that will provide for a better outcome than a year ago when the weather proved to be less than civic inclined, washing out the scheduled appearance of 2012.

Making for a disappointing finish to the day of anticipation for both the locals and the pilots of the 431 Squadron.

This prospect of a show this year, was the thing of a bit of controversy back in January and February, when City Council had originally vetoed any form of financial aid to show organizers, only to reverse itself a few weeks later, all be it after un-named community donors stepped up to lend a financial hand.

For those that plan to take in the show tomorrow however, that's all in the past, old news if you will.

The present offers up yet one more chance to put eyes to the sky and to watch the famed squadron go through their aeronautic paces, providing a show that has been seen at air shows across North America to rave reviews.

The forecast will perhaps provide for a few furrowed brows heading into Wednesday, with Environment Canada offering up the synopsis of Increasing Cloudiness through the day, with showers in the afternoon and periods of rain in the early evening. 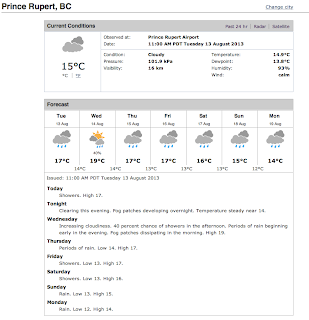 With a little luck, the potentially troubling weather systems stall off the coast for a few extra hours, offering up the window of opportunity for Rupertites and those that will travel here for the show to take in the aerial manoeuvers.

CFNR 98.1 will be providing the in flight commentary and background to the air program as the planes take to the air at 4 PM.

That audio feature will also be heard by way of loud speakers for those that take in the performance from the Waterfront Rotary Park.

As a safety precaution for the air show, the Prince Rupert Port Authority is reminding boaters of the secured area stretching from the Cow Bay/Atlin Terminal area.  The restricted zone runs across the waterfront to the Pinnacle Pellet Plant region, a space which calls for no marine traffic through the area from 3 to 5 PM as far out as 500 metres.

A small diagram and background on the restricted area can be found on page A9 of Friday's Northern Connector.

The Snowbirds have been on a tour of BC airshows for much of this month, with a recent appearance at the Abbotsford Airshow, as well as shows at Penticton, Nanaimo and Quesnel.

The latter provided for a fair number of reviews of the success of the show and a video presentation to give you an idea as to what's ahead on Wednesday.

Following their Prince Rupert appearance, the Snowbirds have one final performance in BC, with a Saturday show scheduled for CFB Comox, from that performance they head  to points due east and then south.

The Northern View had this short preview item posted to their website on  Saturday.