Crime Severity stats on the decline for Prince Rupert

The Statistics Canada review of Crime Severity was released late last month and for Prince Rupert residents the news is showing a positive trend, but with work still to be done.

The 2012 review shows a decline in both the Severe Crime Index and the Violent Crime Index in the community.

Numbers which are still on the high side, but seem to highlight that the local detachment of the RCMP is making progress when it comes to its work in the community.

And while the trends are showing progress, Prince Rupert however is still high atop the list of Crime for the Northwest, with the numbers as follows from the Statistics Canada data base.


The five year table shows that Prince Rupert's numbers are heading in the right direction, with a Crime Severity Index of 165 for 2012, down a fair amount from last years 188 rating.

That makes for a 12 percent change and a rating that is down significantly from 2009, which was the worst year of the last five for crime in the community with a rating of almost 204.

The theme continued when it came to the Violent Crime Index, which saw Prince Rupert's rating sit at 178 for 2012, down from the rating of 228 in 2011 which was the worst of the last five years.

Data for the Prince Rupert Rural sector was not available on the Statistics Canada listings.

You can examine the full statistical review for Prince Rupert (municipal) rom the chart below.
. 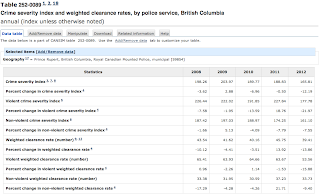 The numbers may give Inspector Wayne Maughan, the new RCMP detachment commander, an opportunity to introduce himself to City Council at one of their upcoming sessions.

Offering up the statistical review and perhaps providing a review of the level of service to the city and an indication as to what resources the RCMP could use locally, as they seek to continue to work reducing the numbers.

Around the rest of the Northwest the Statistics Canada numbers are as follows: 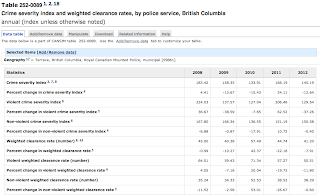 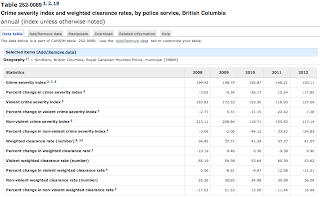 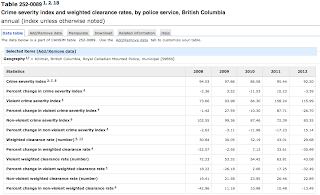 .
For those with a love for statistics (and a lot of patience in searching them out) the full Statistics Canada review can be found here.

The British Columbia breakdown can be found here, pick and choose the community you wish to examine, by way of the add/remove data button.

Among the smaller towns and cities of British Columbia, Quesnel would seem to have some work to do, the statistical review for that community has a rather steep Crime Severity Index rating of 229, While Violent crime features an index of 259.

Williams Lake however would seem to be the one community in British Columbia requiring the most help in fighting crime.


In the world of making lemonade out of lemons, the City of Williams Lake highlighted the decline over the last five years as an indication that things are looking up. Probably cold comfort for those affected by last years spike.

Of note for British Columbians, of the larger communities Kelowna holds down the title of the municipality with the highest of the Crime Severity Indexes, wrestling the title away from Prince George.

That community in the past has placed highly in the rankings, as one of the communities in the province with the most work to do when it comes to tackling crime.

The annual Maclean's magazine ranking of municipalities has featured Prince George in recent years as one of the more troubled cities when it comes to crime, a review that has made for much in headlines in that city in the last year or so.

The Northern View provided this item on the statistics in their August 14th edition.

The Terrace Standard reviewed the numbers for that community here.