Rampage open 2013 season on October 5th, with a visit from Quesnel

Fans of the Prince Rupert Rampage will want to mark October 5th on the calendar, as that's the nigh that the puck drops on the 2013-14 CIHL season, as the Rampage play host to the Quesnel Kangaroos for opening night.

The CIHL had to do some quick revisions in the last week, as we outlined on the blog last week, the Hazelton Wolverines (who were replacing the previously departed Omenica Ice) made a last minute exit of their own from the CIHL for the 2013-14 season, requiring a rework of the schedule for the leagues remaining eight teams.

When all was finished up the nine home dates for the Rampage will provide for a heavy dose of Steelhead, as the Smithers squad, a perennial powerhouse in the CIHL makes three trips west down Highway 16 this year. Smithers will play the Rampage at the Jim Ciccone Civic Centre on November 23rd and January 11th and 12th, the 12th bringing the regular season to an end.

Along the way the Rampage will host the Kitimat Ice Demons on October 12th, November 2nd and December 7th.

The Houston Luckies come to town on November 30th, while the Terrace River Kings make their only appearance at the Jim on January 3rd.

The Rampage hit the road for extended periods of time in October, with games in Terrace and Houston through the last two weeks of the month.

With November another offering up another long and challenging road trip, as the Rampage tour Williams Lake, Quesnel and then Kitimat before returning home.

December sees them on the road twice with games in Terrace on the 14th and Kitimat on the 28th.

The final road game of the regular season finds the Rampage travelling once again to Terrace,  marking their third trip into that city this year.

The Rampage tweeted out the schedule on Friday, providing this handy graphic for fans to consult as the season moves along. 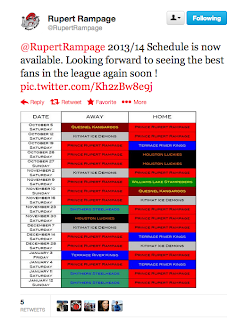 You can review all of our Rampage and CIHL items from our archive page, the 2013-14 season can be found here.

For those looking for a look back at the 2012-13 our past posts can be found here.

On August 21st, The Northern View had this article on the schedule release
Posted by . at 11:14 AM