Prince Rupert and area union members who belong to the CAW or CEP, will soon be part of one larger unit, with the Founding Convention of Unifor but weeks away.

The Convention set for the Labour Day weekend will herald a changing dynamic for the union movement in Canada, bringing together two of the key industrial union movements into one large contingent.

Labour Day will see an executive board selected with 25 members to be elected to the national Executive Board and if the endorsement of the outgoing Presidents of the CAW and CEP are any indication, the new "super-union" will be led by Jerry Dias, a former sheet metal worker, who most recently has worked in the CAW national office.

As the Labour Day weekend convention gets closer, it seems that Dias is the heir apparent to head the new union.

Among some of the union operations on the North Coast, the CAW is the larger umbrella from which UFAWU now operates as well as at Kitimat's Rio-Tinto Alcan operations.

As we relayed on the blog earlier this month, the CAW was in the news recently, over local labour concerns at Air Canada Jazz.

The CEP not only represents some forestry workers in the region ( it was last one of the unions representing workers at New Skeena Forest Products), but workers at the Astral Media chain across the region.

Heading into the fall, all of the workers from the former unions will be represented by the larger collective once the Labour Day gathering comes to an end. 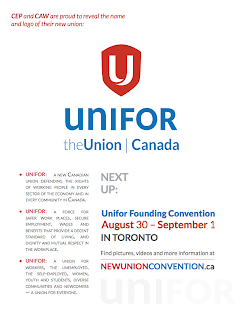 Some of the announced guiding principles for the union heading towards the merger will be:

To defend the rights of working people in every sector of the economy and every community in Canada.

Securing wages and benefits that provide a decent standard of living, as well as dignity and mutual respect in the workplace

Creating a union for workers, the unemployed, the self-employed, women, youth and students, enviers communities and newcomers.

You can learn more about the merging unions from the Unifor website, which offers up a number of background items on the new endeavour,  as well as the prospect of live streaming video of their convention starting August 30th.

Of interest from that website, some details on the road ahead can be found below.

For more items of interest on the new union, find below, some of the media review of the upcoming convention.

Email ThisBlogThis!Share to TwitterShare to FacebookShare to Pinterest
Labels: North coast workers to be part of new merging national union