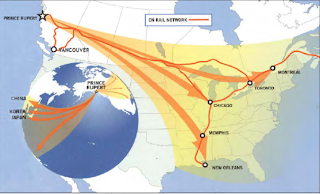 Concerns over the advantages of the Port of Prince Rupert and it's rather efficient transit of containers into the heart of the United States, continues to rate high as an issue of concern for Washington state political leaders.

With the Ports of Seattle, Tacoma and Vancouver, Washington all struggling, the two Senators who represent the state in DC, are looking to as they put it, "level the playing field" between Washington State ports and those in British Columbia.

Senators Patty Murray and Maria Cantwell announced plans on Thursday to introduce legislation that would replace the current US Harbor Maintenance Tax, with a Maritime Goods Movement User Fee.

A tariff that would be placed on all cargoes coming into the United States from the Asia-Pacific market. Included in the scope of that proposed tariff, those shipments to the USA that arrive by way way of Canada or Mexico. 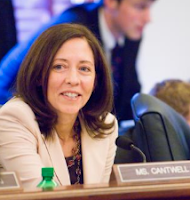 “Currently – the Harbor Maintenance Tax is diverting US-bound sea cargo, which should enter our country through the Port of Seattle, the Port of Tacoma, or other ports along our shores… “Instead, shippers have decided it’s more cost-efficient to send those US-bound goods to Canada and Mexico first – only to ship them to the United States by truck or rail. 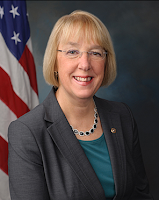 “That means fewer cargo containers coming into our ports. It means less work for longshoreman and pilots. And it means we can’t make investments in infrastructure that our ports need to be state-of-the-art and competitive.

“If that’s not a perfect example of an outdated law, I don’t know what is.-- Senator Patty Murray, Washington, outlining the concerns of Washington state regarding container shipments


The growth of the Port of Prince Rupert has long been in the mind of Washington state. As part of an article for the Seattle Post Intelligencer,  Senator Cantwell outlined that her understanding of the findings of the US Federal Maritime Commission were that up to 27 per cent of container volume moving through West Coast ports is at risk of being diverted to Prince Rupert.

A situation that clearly has raised the alarm bells in Seattle, Tacoma and Portland, Oregon.

The details of the Maritime Goods Movement Act for the 21st Century are outlined here. The fees collected would be made fully available to Congress to provide for American port operation and maintenance, with a portion of the user-fee set to be used for remote and subsistence harbors that are at a competitive disadvantage.

Key to their Act, is the requirement that shippers would not be able to avoid the Maritime Goods Movement User Fee by using ports in Canada and Mexico.

The Seattle Times pegged the proposed fee to average at 109 dollars per  container to be assessed on containers that originate in another country but arrive in the US from Mexico or Canada.

The two Senators plan on introducing their legislation in September.  A proposed bit of legislation that will no doubt hit home in Washington State and may find some traction with a more protectionist inclined Congress.

Not only are jobs at stake should the drift away from the Puget Sound ports continue, but the hit on the regional economy is estimated to be large.

In their remarks, the Senators outlined that for every 10,000 containers diverted away from Washington state, the cost to business in the state is some 1.3 billion dollars. Reducing the income of workers by 833 million dollars.

It's not the first time that the Port of Prince Rupert has appeared on the American radar, a trend which has increased of late as the Port's numbers have moved upwards.

May 2013-- Port of Prince Rupert becomes debate topic in Portland, Oregon
February 2013-- Seattle takes notice of its competition up the coast

The latest forward momentum by the US politicians, does indicate the levels of concern in Washington state and the impact that port activities in British Columbia, highlighted by the success of the Port of Prince Rupert have had on Washington State container terminals.

The full Seattle Post Intelligencer report can be found here.

Other Seattle reports on the proposal can be found from KIRO news,  the Seattle Times, Tacoma News Tribune and the Puget Sound Business Journal

You can review the talking points from the two Senators from Senator Murray's website.

Other media reports on the proposed tax