It's a Ministerial road trip... 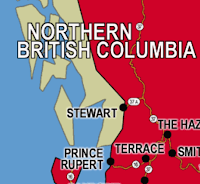 It's going to get a little crowded on the visiting minister front this week in the Northwest, as a trio of Liberal cabinet ministers make the rounds of the region.

Last week the Province announced that Aboriginal Relations and Reconciliation Minister John Rustad would be touring the Northwest this week, a four day visit that started in Terrace yesterday.

At that time they also released the itinerary for Energy and Mines Minister Bill Bennett, who is on his own tour of the region for three days.

Today it's word that Coralee Oakes  the Provincial Government's Minister of Community, Sport and Cultural Development is on a tour of the Northwest, set to meet with local officials and tout the development of LNG resources as part of her tour.

Minister Oakes, has municipal officials, community leaders and business execs on her appointment calendar as she kicks off a tour of Port Edward, Prince Rupert, Terrace and Kitimat .

One of the main aspects of her portfolio is in building up better relationships between communities and the provincial government and when she meets with Northwest officials, it's probably a given that local leaders will bring up a number of concerns.

The Minister is calling on her experience as a Quesnel City Councillor as helpful in understanding the issues of Northwest communities.

"I want to hear ideas on how we can prepare for the generational opportunity of LNG development. I look forward to meeting people from the great communities of northwest British Columbia and working hard on their behalf in Victoria. Through my service as a Quesnel city councillor and North Central Local Government Association director, I can bring personal local government experience to the table as we move forward together."

There are a  number of items of note that city officials could suggest for a discussion. Ranging from the growing burden of infrastructure development with the anticipated surge of growth from LNG and other large industrial projects; to in the case of Prince Rupert, concerns over the growing list of environmental issues associated with the Watson Island industrial site.

The visit from the Minister should give the Mayor and Council in Prince Rupert an opportunity to once again highlight many of their talking points from recent council sessions. Where they have laid out a list of concerns that have dogged Prince Rupert council this year.

Some of the media items on the Ministers tour can be found below.