The August Long weekend may not feature open burning and in some cases campfires, in some corners of British Columbia as our recent string of hot and sunny days makes forest conditions dangerous.

At the moment there is only one wildfire of concern to the Wildfire Management Branch, the Perry Ridge Fire in Southeast British Columbia, which is currently only 20 percent contained.

The Wildfire Management Branch highlighted the danger in the woodlands, with the map below. 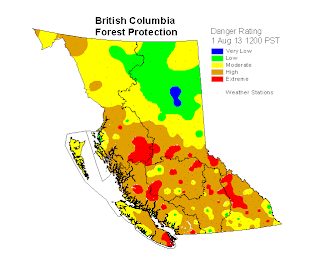 While the conditions for the North Coast and Haida Gwaii are ranked at moderate or low, further east the Danger ratings are increasing to High and in the case of regions surrounding Prince George Extreme.

With significant lightning activity in the region over the last few days, more fires are anticipated.

Weather conditions to the east of Prince Rupert continue to call for Hot conditions, with Terrace, Smithers and across to Prince George all calling for Sun and temperatures at 29 to 30 degrees.

The risk of lightning strikes and thunderstorms increases the closer you get to Prince George.

Details on the latest developments in the Northwest can be found from their Media Centre from their website.

Those camping in the woods and those that travel the highways over the weekend are reminded to exercise caution, be watchful of their campsites and should they see a wildfire to contact the BC Wildfire Management Branch at *5555 or 1-800-663-5555.

News items on the fire danger ratings can be found below: